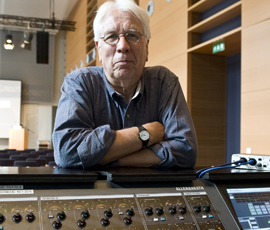 The course, now in its second year, is the most extensive of its type, covering intellectual property aspects of the music, film and publishing industries. Students also learn about the commercialisation of celebrities’ images and video games licensing and other IP issues.

Noam Shemtov, course convener and lecturer in Intellectual Property and Technology Law at CCLS, said: “Peter Jenner talked to students about rights’ management and artists’ contracts in the digital age.

“He gave a fascinating and invaluable industry insight to the kind of legal issues and challenges artists and musician currently face when trying to ‘make it’ in the industry.

“The students’ interest was reflected in the question and answer session, which followed the lecture and lasted for almost an hour.”

The talk followed a series of earlier lectures from Gadi Oron, the Deputy Director of Global Legal Policy at the International Federation of the Phonographic Industry (IFPI), the organisation representing the recording industry worldwide.

In 1964 at the age of 21, Peter Jenner graduated from the University of Cambridge with a first-class degree in Economics and took a lecturing position at the London School of Economics. At 25, he left to manage the then unknown Pink Floyd with business partner Andrew King, and guided the band to superstardom.

Throughout the 1960s Jenner ran a number of free Hyde Park concerts with his management company Blackhill Enterprises, attracting 250,000 fans to the park in 1969 to see The Rolling Stones just two days after guitarist Brian Jones’s death.

In recent years, copyright legislation has struggled to keep up with advancements in digital audio and visual entertainment. As Secretary General of the International Music Managers’ Forum, Jenner oversaw efforts to maintain the rights of artists as the creators of copyright, influence international legislation and policy discussion, and educate at music industry conferences around the world.