An in-house film production unit at Queen Mary, University of London has set up the first scheme of its kind in the UK to help students and graduates break into the notoriously tough UK film business. 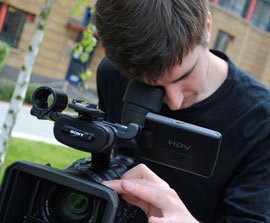 The graduate scheme is open to all Queen Mary students, regardless of discipline, keen to hone their skills and interests in the world of film, build a solid portfolio and make influential contacts.

Under the scheme, graduates are employed as freelancers, set goals and timelines throughout the year and are paid on the back of completed projects. With strong industry links to high-profile production companies such as Mandrake Films, MEF graduate trainees also get enviable mentoring opportunities with established broadcast professionals.

“Lots of our students start out knowing that film is their passion, but aren’t exactly sure how to harness that,” explains Athena Mandis, Assistant Technical Director for Film Studies at QM, and MEF founder. “Technical knowledge is not an essential at the start and we tailor roles according to interests. Our scheme gives them direction and confidence about their future career.”

Established two years ago, MEF has quickly established its reputation as a provider of cutting-edge promotional videos, vodcasts, documentations and study aids.

MEF is currently completing a three-year project documenting the highs and lows of up-and-coming British Olympic athletes as they journey towards London2012 and Rio2016. Shooting, which began in 2010, will run right up to the London Games, with the finished films populating the website of UK Sport – the strategic lead body for high performance sport in Britain.

Of last year’s class of 28 students, many have stayed on at MEF or found positions outside the company as editors, documentary-makers and production managers in film and theatre. Three of the scheme’s graduates are production assistants on television hits such as Made in Chelsea while the 13 students involved have returned to the second or third year of their studies at Queen Mary.

Sapphire Nalden, 23, took part in this year’s graduate training scheme, working on a film called Payback Season. She has since gone on work in production, coordinating and running for a Disney TV commercial shoot with commercials company Great Guns among other projects.

Success stories from the scheme’s previous years include Lukas Demgenski, 27, who followed up his projects with MEF with work on Grammy award-winning Don Letts’ films, Carnival (2009) and Strummerville (2010).

Cheyenne Conway went on to work with the BBC on teen-drama The Cut, while Stella Corradi, 25,  joined stars Catherine Keener and Phillip Seymour Hoffman as a production assistant on the film A Late Quartet (2011).

Although placements are targeted at graduates, undergraduates can also volunteer, cutting their teeth on film projects around their studies. During the year, they learn all aspects of film, from story-boarding, directing, and production to marketing and entertainment law.

Nile Connolly-Martin, 24, and in her second year of a Film Studies degree at QM, worked on one of the short films of the Graduate Training Scheme 2011, Roxanne. She said: “My experiences have been invaluable, not merely in terms of boosting my CV, but also for the contact you get with talented and interesting people who have taught me many things. I hope to bring this to my own filmmaking as I continue to build on these skills through my career.”

Nile has since gone on to make props, puppets and other items at a London theatre, for an as-yet unnamed production about the Blitz. She has also helped build parts of the set for a large-scale installation theatre piece in Sheffield called Slick.

Michael Peers, MEF administrator, and a MA Film Studies graduate at Queen Mary commented: “The film industry is highly competitive and can be harsh, so we give students real responsibility under real conditions. Some 28 graduates and students took part last year and gained a solid grounding about what it’s like to work in film. They worked on three short fiction films and three corporate films during their placement, which are currently in post-production and will be screened in the near future.”

Student work with MEF was submitted to the East End Film Festival in April and May 2011 and has appeared at Short Cinema screenings of up and coming amateur, student and independent films. MEF also hosted two events during the East End Film Festival, a 'Best Of' screening of student work and a seminar on the importance of studying film at university.

For details on how to apply for the graduate scheme, contact Michael Peers on 020 7882 8788 or michael_peers@mileendfilms.co.uk