Hundreds of genetic variants in at least 180 separate genes have been identified as having an influence on adult human height, thanks to a large genome-wide association (GWA) study involving researchers from Barts and The London School of Medicine and Dentistry. 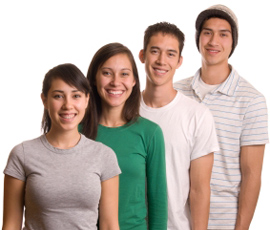 Many human traits, including adult height, have a polygenic pattern of inheritance where the trait is influenced by large numbers of genetic variants, most of which have small effects. An international team of researchers, among them Dr Toby Johnson and Professors Mark Caulfield and Patricia Munroe from the William Harvey Research Institute, reported a GWA study using data from over 180,000 individuals. They identified more than 100 new loci, bringing the total to 180, which collectively account for about 10 per cent of the phenotypic variation in human height. The loci identified were not random but were enriched for genes involved in growth-related processes.

The study’s authors point out that their findings demonstrate that huge international collaborations can amass sufficient sample sizes to identify large numbers of loci that implicate potential causal genes. However, different approaches, including those targeting rare genetic variants with potentially much larger effects, may help understand more fully the genetic component of complex human traits.

Dr Toby Johnson said; “Human height is one of the model systems for learning how to unravel the genetic mechanisms that affect so-called complex traits and diseases. A few years ago, most research groups were working independently, each analysing data from a few thousand individuals, and each study was finding just a handful of height genes. The GIANT consortium has led the way in demonstrating the power of massive international collaborations.  The amount of information we can extract from a really big data set is much greater than the sum of the individual parts.  Right now, complex trait genetics is on the exponentially accelerating part of a discovery curve.”