Andrew Lees, Professor of Neurology at University College London, has become the first ever recipient of the Lord Brain Memorial Medal – awarded for the scientific contributions he has made to the field of movement disorders within the UK. 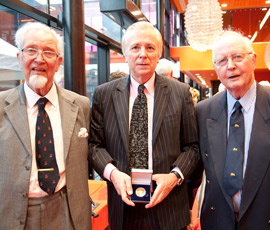 He received the medal following his delivery of the inaugural Lord Brain Memorial Lecture; “Brainwashed by the Black Stuff,” at Barts and The London Medical School on June 24, 2010.

The Lord Brain Memorial Lecture has been established in honour and memory of Walter Russell Brain’s outstanding contribution to the field of neurology. The memorial medal will honour healthcare workers or scientists who have worked in the UK and have a made a major scientific contribution to the field of neurosciences. The lecture will be held biennially and is hosted by the Centre for Neuroscience and Trauma in the Blizard Institute of Cell and Molecular Science, at Barts and The London School of Medicine and Dentistry.

Walter Russell Brain studied medicine at Oxford University - he qualified with a BMBCh in 1922 and joined the newly formed Medical Unit at The London Hospital where he took up neurology.  He was elected a fellow of the Royal College of Physicians in 1931. He made significant contributions to neurology through his discoveries, books and papers, and during his lifetime was elected to myriad positions among them president of the Royal College of Physicians, president of the Association of Neurologists, and president for the Association of the Advancement of Science.  He was Knighted in 1952 and created a Baronet in 1954. He edited the journal Brain from 1954 until his death in 1966.  Lord Brain’s sons – Lord Christopher Brain and Professor Michael were guests at the memorial event.

On becoming the first recipient of the Lord Brain Memorial Medal, Professor Andrew Lees said; “Russell Brain was the consummate physician and a man of great integrity. His Textbook of Neurology was staple reading during my training and his original contributions to the understanding of neurological disorders were emphasised by my teachers. The Royal London Hospital has a distinguished and long tradition as a centre of excellence for neurology and neurosurgery and it is an unexpected honour and great pleasure to have been chosen to deliver the First Lord Brain Memorial Lecture at my alma mater.”

Professor Lees has achieved international recognition for his work in Parkinson’s disease and other movement disorders.  He is director of the Reta Lila Weston Institute of Neurological Studies at University College London, and Professor of Neurology at the National Hospital for Neurology and Neurosurgery in London.   In 2006 he was awarded the prestigious Movement Disorders Research Award by the American Academy of Neurology (AAN).