Finbarr Cotter, Professor of Haematology at Barts and The London School of Medicine, has been elected President of the British Society of Haematology. 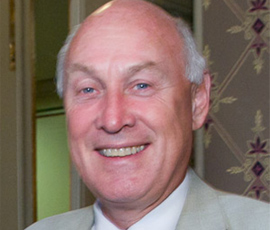 With over 1500 members the Society - this year celebrating its 50th anniversary - is the representative organisation for all UK Haematologists. Professor Cotter is also Editor-in-Chief of the British Journal of Haematology, and the website for haematology research and training run in conjunction with the Society, www.Bloodmed.com.

Since transferring, in 2009, from the Blizard Institute of Cell and Molecular Science at Barts and The London School of Medicine, to its Institute of Cancer, Professor Cotter has pursued a longstanding research interest and expertise in B-cell malignancies associated with indolent lymphoproliferation, including Chronic Lymphocytic Leukaemia (CLL) and Follicular Lymphoma. His move to the Institute of Cancer has placed him in the same unit as Professor John Gribben who himself has an internationally respected clinical research interest in CLL and their collaboration is brining about a greater merging of clinical and more basic laboratory research aimed at making theirs one of the major Lymphoproliferative Research Centres in the UK.

Commenting on his election Professor Cotter said; "It is a real honour to be appointed the President of the British Society for Haematology. I have been involved with the Society for over a decade as it has developed into an important representative organisation for all haematologists in the UK with input into both education and clinical practice, including its internationally recognised guidelines. During my time as President I aim to further promote the advance of academic haematology and the modernisation of haematology within the health service. The website www.Bloodmed.com for which I am Editor-in-Chief is part of this development. Globally the BSH is fostering a relationship with the developing countries to improve haematological care in poorer economic areas of the world. It is a real pleasure to take up this appointment and the support from the Medical School and Queen Mary has been appreciated in catalyzing this important appointment."