A new cancer centre, formed though a partnership between Cancer Research UK, Queen Mary, University of London, and Barts & The London NHS Trust, puts London at the forefront of cancer research. 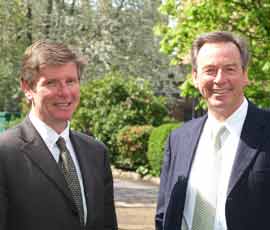 The Barts Cancer Research UK Centre is the latest link in a unique chain of centres being launched around the country.

The Centre will receive more than £2 million worth of funding from Cancer Research UK.

It will focus mainly on pancreatic, breast, ovarian and prostate cancer, leukaemia and lymphoma. The laboratory research will investigate the genes that drive cancer. It aims to identify markers for early diagnosis and targets for new therapies.

The Barts Cancer Research UK Centre is at the cutting edge of research into cancer gene therapy and stem cells, adding to its existing wide-ranging programme of clinical trials of experimental treatments.

It will also carry out research into population studies, cancer prevention and public health. It will also study biological therapies – such as those using antibodies, drug target identification and research into biomarkers for early diagnosis and ways to measure early patient response to treatments.

Collaboration will be the key to the Centre’s success, making it easier for researchers in the laboratory to work alongside doctors treating patients on the ward. This enables patients to benefit as soon as possible from research breakthroughs.

The Centre will also work to engage the local community with the world class cancer research that is going on right on their doorstep.

Professor Nick Lemoine, Director of the Institute of Cancer and the Cancer Research UK Centre, at Barts & The London School of Medicine & Dentistry, said: "This Centre brings together top-ranked scientists in the medical school with expert clinical teams in the brand new cancer hospital to push forward laboratory discoveries into benefits for patients.

“The Centre sets the pace for national and international progress in a number of different cancers. The development of the latest gene therapies, and ways to detect cancer as early as possible, continues a long tradition of discovery at Barts, where researchers pioneered the use of many surgical procedures and the use of radiotherapy to treat cancer.”

Peter Hall, 45, lives with his wife and her two children in Southend, and has two teenage children of his own. He works for Cancer Research UK as an Area Volunteer Manager.

Peter was diagnosed with Non-Hodgkins Lymphoma in October 1993 and received various chemotherapy treatments and a bone marrow transplant at Barts. Each time he had chemotherapy his disease went into remission only to be followed by a fairly swift and widespread relapse but, after his last relapse in October 2002, he has gone on to recover and was given the all-clear by medical team at Barts in December 2005. He is now fully fit and well and enjoying life.

“My treatment at Barts and the Royal London has been incredible. A few years after I was first diagnosed my condition took a serious turn for the worse and I decided on an ill-health retirement option. But, against all the odds, I went on to make a full recovery and am now able to enjoy life with my wonderful family to the full. I am delighted to hear about this new Centre which will help other people beat their cancer like I have.

“I thought I’d celebrate my recovery and second chance at life and ran my sixth London Marathon in 2009 – seven marathons so far! I also have cycled across China, and 600 miles through Vietnam's mountainous Northern territory – as well as John O’Groats to Lands End in 2007 to raise money for - and to say thank you - to the hospice that helped save my life and looked after me while I was terminally ill – raising over £55,000.

“My job with Cancer Research UK reflects my own personal journey with the disease and takes me back to where things are most important, and where I feel I can make the most difference and impact.  I love being part of our charity that’s helping to save so many lives - it feels just great!

“I have two wonderful children, Tom 16 and Holly 14, who helped sustain me when times were difficult. They now know that they needn’t fear cancer and that there is always hope. And I married Elaine in January 2010 after we met at the hospice.”

Professor John Gribben, consultant haematologist and medical oncologist at Barts and The London NHS Trust, said: “The Centre will bring together world-class research and clinical delivery to push the boundaries in understanding cancer. This in turn will lead to preventing disease and developing better diagnostic techniques and treatments. Ultimately this will improve cancer survival and enhance the quality of life for those with long-term disease.”

Harpal Kumar, chief executive of Cancer Research UK, said: "Funding these centres of excellence is one of the charity's priorities and will enable us to work towards the goals we have set to improve the treatment and survival of cancer patients.

“We’re able to launch this new centre thanks to the generous donations of our supporters but we need their continued support if we are to build on what we have started today.”