Award for GP researcher is a first for women doctors

A prestigious award from the Royal College of GPs has been won by a professor at Barts and The London School of Medicine and Dentistry. 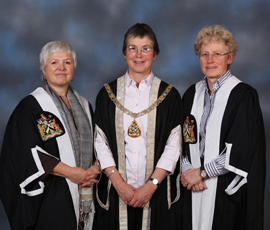 Professor Trisha Greenhalgh was given the George Abercrombie Medal at the College’s annual award ceremony last month for her outstanding contribution to the literature of general practice.

The award was given by the College’s President, Dr Iona Heath, and its Honorary Secretary, Professor Amanda Howe. It was the first time in the College’s history that the award was both given and received by female doctors.

Professor Greenhalgh said: “Receiving this award was an iconic moment because this is the first time ever there have been three women in those roles.”

At the ceremony, Professor Howe highlighted Professor Greenhalgh's unique contribution to GP research, including her work in managing chronic conditions – such as diabetes – in minority ethnic groups. She also highlighted her efforts to make studying medicine more accessible and her work with medics in low-income countries.

Professor Greenhalgh was also recently made a Fellow of the newly formed Society of Biology for her contribution to public debate about science.