Thanks to researchers at the Centre for Digital Music (C4DM) at Queen Mary, University of London, anyone watching the World Cup on their computer can now filter out the droning sounds of vuvuzela playing in South Africa's stadiums. 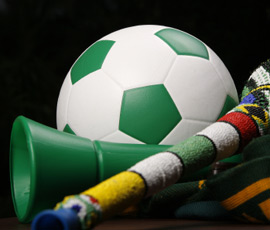 One of the unexpected hot topics of the World Cup 2010 is the vuvuzela, a new sound to the ears of many football fans. Though hugely popular for its invigorating sound and dramatic volume level, this traditional South African musical horn was badly received by some television viewers since the recorded sound of massed vuvuzelas could reduce the audibility of the commentary.

Dr Chris Cannam and a team of researchers from the C4DM have analysed the sound and devised a filter which could improve the clarity of the commentary, which is downloadable as a working "devuvuzelator", largely removing the sound of the instruments.

Various approaches have been discussed by audio engineers, most commonly using "notch filtering", which removes sound energy from specific frequencies. The vuvuzela sound energy is mostly found within narrow frequency bands - the fundamental frequency (approximately 230 Hz) and some higher overtones - so targeting those specific frequencies is a reasonable way to quieten the vuvuzela sound. Unfortunately, notch filtering also has a tendency to remove some of the energy from the commentator's voice too, since the frequency distributions of the voice and vuvuzela overlap.

Dan Stowell of the C4DM said, "Our approach was to make a filter which estimates the amount of energy in the signal contributed by vuvuzelas, at the specific frequencies expected, and then subtracts just that energy. This 'adaptive' approach potentially preserves the voice energy in the signal and helps preserve voice quality."

The C4DM's filter adds a degree of intelligence beyond ordinary filters. It is actually not as complex as some of the techniques developed by the group, such as source-separation algorithms which can take a recording containing a singer and a piano and work out how to extract just the singer's voice. But the filter is simple enough that it can be run in real-time and applied to a live broadcast as it happens, on an ordinary home computer.