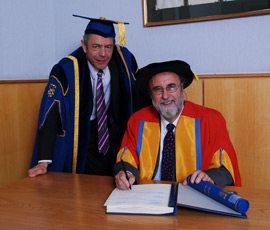 Chief Scientific Advisor to the Department of Environment, Food and Rural Affairs (Defra) and notable Queen Mary alumnus, Professor Watson is recognised for his contributions to scientific research into atmospheric science issues including ozone depletion and global warming.

Professor Peter Heathcote, Head of the School of Biological and Chemical Sciences, praised Watson, saying, "The scientific community recognises the sustained and significant contributions made by Bob Watson to research into atmospheric science. The wider community is also indebted to Bob Watson. He has not only made significant contributions to the debate around global warming, but admirably served international and national organisations in the fields of environmental science, promoting biodiversity, impeccable agricultural practice and sustainable development that serves all humanity."

Professor Watson said, in his acceptance speech, "It is a true honour to be made a Fellow of Queen Mary. I look back at my career and think, is it really possible that coming from Romford from a single parent family, I could have been so lucky in my life? Who would have thought that I would one day work in the White House with [Al] Gore and [Bill] Clinton, the World Bank with Jim Wolfensohn and now the UK Government? My education at Queen Mary was excellent at both the undergraduate level and PhD level and owe literally all my success to my education here."

Professor Watson began his scientific career at what was then Queen Mary College, University of London in 1966, graduating with first class honours in Chemistry in 1969, followed by a PhD in Gas Phase Chemical Kinetics in 1973.

He then moved to the United States to work at the famous Jet Propulsion Laboratory, then to NASA in 1980. Watson worked his way up the ranks to be appointed as Director of the Science Division and NASA Chief Scientist in 1993 and as Associate Director of the Environment to the White House Office of Science and Technology Policy, later that same year. Professor Watson joined the World Bank in 1996, serving as Chief Scientist and subsequently Director and Senior Advisor for Environmentally & Socially Sustainable Development.

In 2007 he returned to the UK to become Chief Scientific Advisor for the Defra and is also currently Director for Strategic Development, University of East Anglia's climate research institute, the Tyndall Centre.

During this distinguished career in scientific research and science and environmental policy Professor Watson has held numerous technical and scientific positions on international and intergovernmental panels. His scientific contributions have been recognised by many awards, including the American Association for the Advancement of Science (AAAS) Award for Scientific Freedom and Responsibility in 1993 and the insignia of Honorary Companion of St Michael and St George in 2003.