Influential American performer Ron Athey is visiting Queen Mary, University of London from March until June 2010 as a Leverhulme Trust Artist in Residence. 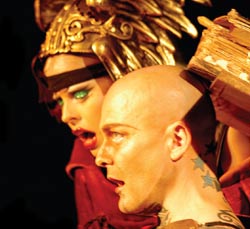 Based in the Centre for the History of the Emotions at the College, Athey will give public lectures and talks on his artistic career and research new material towards a forthcoming book, to be published by MIT Press with Live Art Development Agency.

Cutting a contentious figure in the US, Athey uses body art and live performance to tackle taboo subjects like sexuality, the politics of HIV and AIDS, and body modification. He also challenges pre-conceived notions of the body, masculinity and religious iconography, inspired, in part, by his own “extremely dysfunctional Pentecostal” upbringing.

Incorruptible Flesh (1997-2008), which has toured internationally, is a prime example of Athey’s use of sadomasochism and ritual piercing and cutting to create a visceral effect among the audience.

A practicing artist since his first collaborations with the founder of Goth Metal, Rozz Williams, in Los Angeles in 1981, Athey rose to international prominence during the early 1990s. The now-infamous Four Scenes in a Harsh Life (1994) brought him to the attention of right-wing legislators in the Senate, resulting in a five per cent cut in the National Endowment for the Arts.

The debacle was injurious to Athey’s reputation in the US and anticipated similar challenges in the UK - including his censoring at the Institute of Contemporary Arts in 1994 - yet has also inspired his iconic status.

“Athey’s centrality to the recent history of contemporary performance is beyond question,” says Dominic Johnson, Lecturer in Drama at Queen Mary and co-host of Athey’s artistic residency, “as demonstrated by the extensive critical attention to his work, and the debts owed to his influence by a generation of younger practitioners.

“His presence at the College is well suited to the research concerns of the Centre for the History of the Emotions, not least because experiencing his work is deeply moving – even harrowing – as attested to by the fainting, panic, swoons and tears his performances often induce in audiences,” adds Domenic, who has previously collaborated with Athey.

Wellcome Award Lecturer in the History of Medicine, Queen Mary

Professor of Philosophy in the Visual Arts & Communication Technologies, University of Greenwich

Time: 6.30pm: An Evening of Conversations