The Legal Advice Centre at Queen Mary, University of London won at the Attorney General Student Awards at the House of Lords on Tuesday 30 March. 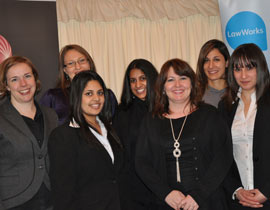 The project, the first of its kind in higher education, sees students from the Department of Law provide free, confidential advice to the Lesbian, Gay, Bisexual and Transgender community on issues such as employment discrimination, immigration, and civil partnerships.

“The students involved have worked above and beyond what is expected of them, in order to ensure access to justice for our clients,” said Julie Pinborough, Legal Centre Manager. “The award is a gleaming acknowledgement of our department’s standing within the profession and something we should all be proud of.”

The only university to receive two awards this year, Queen Mary was also a runner-up in the Best New Pro Bono Project category, for its scheme to provide free advice to local traders on issues such as revocation of market licences and on-the-spot fines by council officials.

Since opening its doors in 2006, the Legal Advice Centre – based in the Department of Law - has advised hundreds of clients on issues as diverse as landlord and tenant disputes, personal injury, and medical negligence. The Centre is now providing free legal advice to those in the creative industries.

The Centre previously won the Attorney General's Pro Bono Award 2008 and was the only university to be short-listed for the Law Society Excellence Awards 2008.

The winners of the other categories were: