With increasing focus on disruptive behaviour in primary schools, the UK government has placed ‘emotional literacy’ on the curriculum.

A new research project at Queen Mary, University of London will ask whether this is an appropriate goal for policy-makers and how it might be achieved. 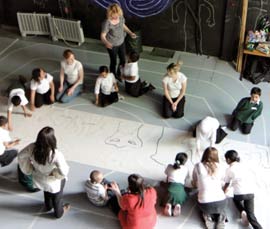 The project follows on from Sir Jim Rose’s recent review of the primary curriculum, which recommends Under 11s be taught how to manage their feelings, empathise with others, work in a group and resolve conflict.

With a £100,000 grant from the Arts and Humanities Research Council, the project brings together an unusual mix of historians, performers, educators and local primary school children. Entitled Embodied Emotions, it draws on insights from psychology, philosophy, social history, performance practice and educational theory.

“One could argue that dealing with pent up emotional issues helps children to be happy and effective learners, but whether it is a parental role or one for educators is debatable,” says Dr Thomas Dixon, a specialist in the history of emotions, and a collaborator on Embodied Emotions.

He is exploring past attempts by British governments to shape the nation’s emotional ‘wellbeing’. Dr Dixon is also researching to what extent educational policy setting has been influenced by the expression of emotions in artistic, theatrical, medical and legal arenas.

“Talk about emotional literacy is a fairly recent development, but probably has a longer history,” explains Dr Dixon. “It would be interesting to know whether or not the Victorian pioneers of state education envisaged it as something schools of the future would provide.”

“It is important for children tell stories, perform and to reflect on their own feelings,” says Ali Campbell. “Emotional literacy can help children express what they do in the playground, but in a more structured and supervised way.”

“The children each perform a different physical movement, and then explain to classmates what emotional story lies behind their pose. It gives the children a chance to use their imaginations and learn how feelings affect behaviour,” explains Ali Campbell.

Each workshop will be filmed by film-maker Bhavesh Hindocha. The footage will form part of a documentary on the project to be screened at the Museum of Childhood in Bethnal Green.

The one-day showcase event will include talks, video installations and round table discussions on emotional literacy. Attendees will include primary school teachers, education policy-makers and members of think tanks such as Demos.

“If the emotional literacy agenda is to be extended, we hope our research findings will assist education policy-makers and give busy teachers an easy yet creative lesson template to work with,” adds Ali Campbell.