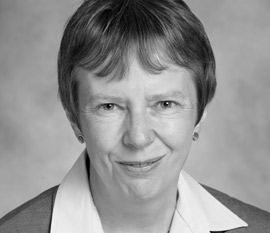 Speaking at an event to launch the newly renamed School of Economics and Finance at Queen Mary, University of London, Kate, who is now a Senior Adviser at Credit Suisse, delivered a enlightening speech entitled: 'Gilding the Lily or Fixing the Roof? Does UK monetary policy need reform?'

“Clearly the depth of recession, combined with fiscal tightening and a financial sector also engaged in repairing its balance sheets, presents a tremendous challenge for monetary policy,” said Barker, a leading economist who left the MPC in May after nine years on the committee.

“Some suggestions are emerging for how monetary frameworks should be revised, either on the grounds that a different framework could have at least partially averted the financial crisis, or because it would have helped to resolve today’s dilemmas,” explained Barker.

During her speech to a 100-strong audience, Barker challenged Blanchard’s view that higher inflation should be aimed at, or permitted in regimes which have not adopted a numeric inflation target, to give more scope to cut real interest rates in a crisis.

“This seems to me,” remarked Barker, “rather unpersuasive.” “Such a move up in the inflations target, however carefully explained, would be highly damaging to credibility in a way that might take years to recover from.”

Taking the longer-term view matters, stressed Barker, given that the major worry at present is about a prolonged below-target inflation period that might be largely beyond the two-year horizon.

Barker went on to question how far having a precise numerical target is helpful in these circumstances. “With hindsight it is possible to wonder whether the focused on a precise target for CPI inflation was one of the factors that caused the MPC to pay less attention to the build-up of various imbalances in the economy.”

Barker acknowledged that the backdrop of the crisis would be a “very bad moment to make any changes to the regime”, but felt such lessons were important to remember in “calmer times”.

She tentatively raised the issue of whether a broader price stability target, rather than the present numeric target might be adopted to allow a more strategic approach to policy to be taken. “I would see this as a development of the framework, as it became more mature; it would certainly not be ‘going soft on inflation’”, Barker notes.

Later in her speech, Barker discussed the proposal to establish a Financial Policy Committee (FPC) within the Bank of England, with the remit to carry out macro-prudential regulation to address “aggregate risks and vulnerabilities across the system”.

From the beginning of the inflation targeting regime, explained Barker, there has been discussion about whether, with an independent central bank, monetary and fiscal policy could be sufficiently coordinated.

In the current proposal, said Barker, the MPC would “have an opportunity to assess the FPC’s decisions and, indeed, vice versa”.

She mentioned comments raised in some corners of whether it might be possible for the decisions of the FPC and the MPC to be “pushing in opposite directions”, and whether it was appropriate for the two committees to be separate.

“I doubt that a really perverse outcome, where the two policies work against each other, would result more that very occasionally,” suggested Barker, "however," she added, "the latest plans for reform of financial oversight and macroprudential regulation add a third aspect to the coordination problem, and under present proposals there may be a need to ensure more clarity in how the three aspects of policy work together.”

“As macroprudential policy is put forward as the missing link, the wider public might be forgiven for reflecting that this is not the first time policymakers have claimed to have made a major improvement in macroeconomic management – but so far none of these have proved to be fully satisfactory.”

With hindsight, reflected Barker, some greater modesty about understanding of the economy might have been justified in the first decade of the MPC. “There are certainly changes in the way in which the MPC operates, especially with regard to the target horizon, which I believe could improve the conduct of policy.”

Kate Barker was guest speaker at the evening event, which was held at Butchers Hall in London on 18 October 2010. The occasion marked not only the transition from the Department of Economics to the School of Economics and Finance, but at the same time showcasing the School’s five-year expansion programme, and a portfolio of new financial courses.