Pollution and the respiratory health of London children

An innovative study into the links between air pollution and vitamin D deficiency, and their impact on the respiratory health of children in east London is announced today, involving scientists from Barts and The London School of Medicine and Dentistry. 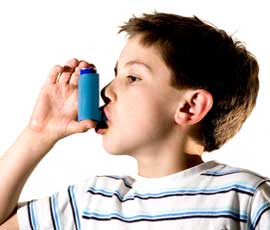 The EXHALE programme, (Exploration of Health and Lungs in the Environment) involves children from East London, who researchers believe are most at risk from the negative effects of pollution on respiratory health. Children from Tower Hamlets attending schools located close to main roads will be studied to define the effects of traffic emission reduction, using comparative pollution and respiratory health data from before the introduction of the Low Emission Zone.

Professor Chris Griffiths from Barts and The London School of Medicine and Dentistry, who is carrying out respiratory tests on the primary school children over a four-year period, said: “We are focusing on children because damage done to their lungs by traffic pollution almost certainly persists, and makes lifelong lung problems - and possibly early death - more likely. By measuring childrens’ breathing and lung inflammation over several years and gathering genetic information, we will be able to establish links between respiratory health problems, pollution exposure and the role of genetic susceptibility.”

The project has received a £1.2 million grant from the National Institute for Health Research comprehensive Biomedical Research Centre at Guy’s and St Thomas’ and King’s College London and will be undertaken by researchers and clinicians working in the comprehensive Biomedical Research Centre; the MRC-Asthma UK Centre in Allergic Mechanisms of Asthma; Barts and The London School of Medicine and Dentistry; the University of Edinburgh; and Homerton University Hospital.

Professor Tak Lee, Head of the Division of Asthma, Allergy and Lung Biology at King’s College London, who is leading the study said: “There is increasing evidence that vitamin D deficiency and pollution play a role in poor lung health, but little is currently known about their combined effects and the changes that take place in the lungs themselves. This major research programme should help us find the answers.”

The European Commission recently announced that they will be starting proceedings against the UK for a rise in pollution levels, which coincides with a decision by the Mayor’s office to suspend the third phase of London’s Low Emission Zone, meaning the need to assess the effects of pollution on respiratory health in inner city areas such as East London has become even more crucial.

The findings will help to inform government policies nationally and internationally as well as answer important questions about asthma.  These include the role of genetic factors, and how pollutants deposit in the lungs and damage respiratory cells.

Professor Tak Lee added: “This project is hugely important for our local population.  London has one of the worst traffic pollution problems in Europe and local children almost certainly have very high rates of vitamin D deficiency. I am confident that this study will lead to real advances in the understanding of asthma and the clinical care we can deliver to our patients.”

Dr. Elaine Vickers, Research Relations Manager, Asthma UK says: “The question of whether pollution can cause asthma has been debated for many years but as yet we have no definitive answer. However we do know that pollution is a trigger for two thirds of people with asthma and can make a huge difference to their quality of life.”

This research aims to shed light on how two major environmental factors: pollution and sunlight, affect the development of asthma in children from a range of different ethnic backgrounds. As the UK has one of the highest rates of childhood asthma in the world, with over a million children currently receiving treatment, this could have major implications for government environmental policies in the future.”