Experts at Barts and The London School of Medicine and Dentistry believe that tobacco chewing may have led to an alarming rise in the number of cases of oral cancer in East London. 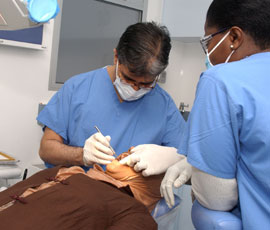 Chewing paan, a mixture of tobacco and areca nut, is common within the Bangladeshi community, and is a habit which is known to cause oral cancer.

Dr Anand Lalli and his team from the Centre for Clinical and Diagnostic Oral Sciences, toured areas of east London with a mobile dental unit, screening 1300 local Bangladeshi residents for early signs of oral cancer

Dr Lalli estimated that one in every fifteen people who was examined as part of the screening programme funded by Cancer Research UK, were referred to the hospital for further investigation.

A national study published on 11 August, by Cancer Research UK found that rates of oral cancer have risen by a quarter among people in their 40s since the mid 1990s.

The study linked the rise in oral cancer rate to increase alcohol consumption, however Dr Lalli’s findings are in contrast to the national picture. He explained:  "Along with the rest of the UK, we are seeing an alarming rise in the number of people being diagnosed with oral cancer.

“The rise is being linked to drinking alcohol because of the huge increase in alcohol usage in the UK in recent decades. Rather than alcohol, we believe that within the Bangladeshi community, chewing paan with tobacco or areca nut is the key contributing factor. We know that in parts of south Asia where paan usage is widespread, oral cancer is one of the commonest causes of death from all cancers."