Professor Nick Lemoine, Director of the Institute of Cancer at Queen Mary, University of London, has been awarded this year’s Yellow River Friendship Prize. 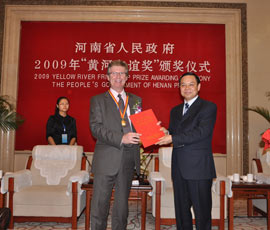 The prize is the highest honour bestowed on a foreigner by the Chinese Government.

Professor Lemoine received the award in recognition of his “outstanding contribution to the wealth and social wellbeing of the people of Henan Province”.

The award comes as a result of Professor Lemoine's work for the Sino-British Centre for Molecular Oncology, founded through a collaboration between Queen Mary and Zhengzhou University in Henan Province..

The Centre is developing viruses to treat cancer, and is funded through grants from the National Science Foundation and the government of Henan Province.

Cancer is an increasing problem in China as well as the rest of the world, and an exchange programme has been established to train Chinese scientists in cutting-edge molecular oncology technology.