For the first time, you can now download an album of digital music written exclusively for Twitter. Entitled sc140, this unique collection has been curated by Dan Stowell, a composer and computer scientist at Queen Mary, University of London. 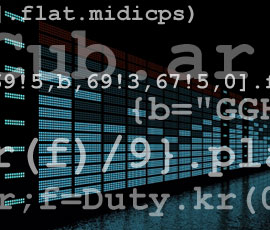 It may be nearly Christmas, but Stowell explained that this isn't the kind of album that would be appreciated by your average relative: "My granny might raise her eyebrows if I gave her sc140 for Christmas, but if yours is the Aphex Twin type, then she'd definitely love it."

Messages on micro-blogging site Twitter are limited to 140 characters - barely enough room for an articulate sentence. However, a new breed of cutting-edge composers are coming up with programming tricks to squeeze as much as five minutes of music into those 140 characters.

"It all started a few months ago," said Stowell, who is studying for his PhD in Queen Mary's Centre for Digital Music (C4DM). "I was writing in a programming language - called SuperCollider - that tells a computer what sounds to make and posted a tweet containing the instructions to create a sound like waves crashing on the shore. The next thing I knew people were tweeting back with sounds and music of their own."

He went on: "Some of the tweets made such great music that I couldn't just let them vanish into the ether. So I brought all the best ones together in an online album, called sc140, which anyone can download for free."

Musicians can already collaborate online by sending audio recordings to each other, but this new project may lead to the traditionally solitary process of composition becoming the latest craze of social activity. The speed of social network messaging could take musical collaborations to a new level, like a 'hive mind' of composing inspiration.

"For computer scientists and composers alike, it's an interesting challenge," said Stowell. "Musicians often enjoy the challenge of working within limitations, and in our research group we investigate new ways of making music and communicating artistically."

Stowell and his colleagues in the Centre for Digital Music work to apply computer science and audio signal processing to help analyse music and create new ways to enjoy music. Since its founding members joined Queen Mary in 2001, the Centre has grown to become arguably the UK’s leading digital music research group.

He is also part of a scheme called NOISE (New Outlooks In Science & Engineering), which is a UK-wide campaign funded by the Engineering & Physical Sciences Research Council (EPSRC). By providing media and public engagement training, the initiative aims to provide early-career researchers with the tools to communicate their work effectively.