100 students from 25 schools from across London and the South East will enjoy an interesting fun-filled day of chemistry at the Salters' Festival of Chemistry to be held at Queen Mary, University of London, on Wednesday 22 April 2009. 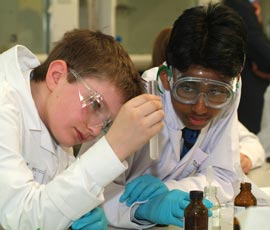 Each school will be represented by a team of four 11-13 year olds. During the morning the teams will take part in a competitive, hands-on, practical activity, Murder (?) at Saltmarsh Farm in which they will use their analytical chemistry skills. In the afternoon, they will compete in the “University Challenge”, a practical activity fiendishly designed by the Festival organiser, Dr Adrian Dobbs, in which they will be required to make the colours of the rainbow using various everyday chemicals.

This will be followed by a fun lecture, by Dr Mike Watkinson, involving looking at the properties of solids, liquids and gases, in an innovative and often explosive manner!

The day will end with a prize-giving by Professor Peter Heathcote, Head of the School of Biological and Chemical Sciences at which all participants will be given individual fun prizes and participation certificates and the winning teams will be awarded prizes for their schools.

The festival will also be attended by Dr The Hon Alexander Todd , a prominent scientist and senior member of the Salter's Institute, whose father Lord Alexander Todd, won the 1967 Nobel Prize winner for Chemistry. Dr Todd will have the chance to tour the laboratories during the two practical sessions.

The Salters' Festivals of Chemistry are an initiative of The Salters' Institute, whose aim is to promote the appreciation of chemistry and related sciences among the young. The Festival at Queen Maryis one of a series of fifty-five Festivals which are taking place at Universities throughout the UK and the Republic of Ireland between March and June 2009.

The Institute is delighted that the Royal Society of Chemistry is again working in partnership with it for the Festivals this year.