An ambitious scholarship scheme to help the poorest students pursue their dreams in science and engineering, and sponsored by an alumnus of Queen Mary, University of London, has been announced today. 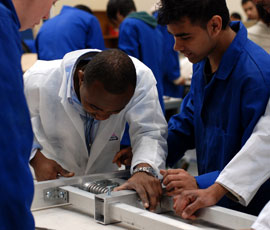 Successful businessman and Queen Mary alumnus, Dr Naim Dangoor, has pledged a generous £3 million to give talented students the opportunity to study science, technology, engineering and mathematics subjects at 1994 Group and Russell Group universities; the UK's leading higher education institutions. The grants will be matched by the chosen institutions and by government.

The Eliahou Dangoor Scholarships hope to encourage students to study subjects that are vital to the country's international standing and future economic growth, but have seen a recent decline in popularity.

Queen Mary is especially pleased to participate in this scheme as Dr Naim Dangoor studied Engineering at the College during the 1930s. Queen Mary is also delighted to extend the scheme's proposed funding, increasing the number of scholarships available at the College to 33 per year for three years.

Dr Dangoor has said that the scholarships, named in honour of his father Eliahou Dangoor, are his way of thanking the country that gave him refuge after he left Iraq in the 1960s.

Professor Simon Gaskell, Queen Mary's Principal, said: "The Eliahou Dangour Scholarship scheme is both generous and insightful. By opening up opportunities like this, we hope to produce the next generation of top graduates with the skills needed to maintain the UK's leading position in innovative and technological industries."