Part of this year's Nobel Prize in Physics has been awarded to Honorary Fellow Professor Charles Kao for work on fibre optic technology in the 1970s, which he carried out whilst holding the position of Visiting Research Associate at Queen Mary, University of London. 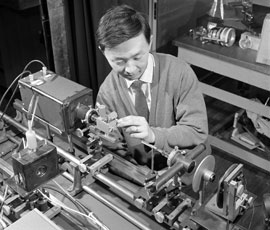 Charles Kao and his colleague, Queen Mary's visiting Professor George Hockham, are widely recognised as the pioneers of optical fibres. In 1966, while working at the Standard Telecommunications Laboratories (STL) in Harlow, they proposed the possibility of producing low loss optical fibres.

Following the publication of their ground-breaking paper "Dielectric-fibre surface waveguides for optical frequencies", considerable interest was generated round the world to turn the concept into a reality. Before then, the loss of data as it travelled along the fibres meant that they could not be used for long-distance communications.

Today optical fibre cables span the world and nearly all internet traffic, voice and data are conveyed by these means. The days of delays caused in satellite communication voice transmission are now long past and as the system is digital, the clarity of transcontinental communication is near perfect.

The significant prediction made by Kao was that by using a quartz glass, the signal loss in optical fibres could be reduced to a level which would allow transmission of information over long distances feasible. Hockham's major contribution was in predicting the optimum diameter of the fibre core and how much it can bend around corners before the signal is lost.

Both Kao and Hockham have associations with Queen Mary. Professor Kao joined Peter Clarricoats’ Research Group as a Visiting Research Associate in 1969, in what is now the School of Electronic Engineering and Computer Science. He now holds an Honorary Fellowship at Queen Mary as well as being chairperson and chief executive of a successful technology company. Hockham is a Visiting Professor in the department and an Honorary Visiting Professor at the Beijing University of Posts and Telecommunications, where Queen Mary offers several joint programmes of study.