A new telescope that can map the sky much faster and deeper than any other infrared telescope, has made its first release of stunning images. 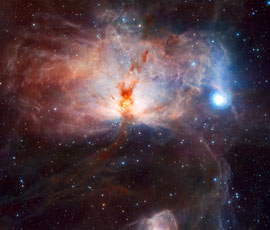 VISTA image of the Flame Nebula

VISTA (the Visible and Infrared Survey Telescope for Astronomy) is the world’s largest telescope dedicated to mapping the sky in infrared light and will reveal a completely new view of the southern sky.

It has been built by a project team led by scientists from Queen Mary, University of London, who obtained funding of £36.8 million to construct the telescope. The finished telescope is now based at the European Southern Observatory (ESO) site in Chile’s Atacama desert.

Among other things, VISTA's surveys will help our understanding of the nature and distribution and origin of known types of stars and galaxies, map the 3-D structure of our galaxy and its nearest neighbour the Magellanic Clouds, and locate examples of rare objects for detailed study. Queen Mary astronomers lead one of six teams who will be using VISTA to make six major public surveys over the next five years.

Professor Jim Emerson from Queen Mary’s Astronomy Unit, led the VISTA build project. He explains: “The opportunity to organise the provision of the world’s best infrared survey telescope has been a great experience.

“It is the combination of large silver coated mirror, highly efficient optics and detectors and good quality images over a 1.5 square degree image that makes VISTA such a powerful tool for infrared surveys.”

At the heart of VISTA is a 3-tonne camera containing 16 special detectors sensitive to infrared light with a combined total of 67 million pixels.

Observing at wavelengths longer than those visible with the human eye allows VISTA to study a wide range of objects, including stars hidden by interstellar dust, very cool stars that are hard to detect in visible light and the most distant galaxies where the light is stretched beyond the visible into the infrared by the expansion of the Universe.

“The spectacular new images of the Flame Nebula, the centre of our Milky Way Galaxy and the Fornax Galaxy Cluster show that VISTA is working extremely well”, added Professor Emerson.

Dr Will Sutherland, also from Queen Mary’s Astronomy Unit, and the VISTA Project Scientist, also commented: “Delivering sharp images over VISTA's extremely wide field required several novel features in the design. It's wonderful to see VISTA working so well: these images are just a small sample of what VISTA will deliver in the near future.”

Each VISTA image covers an area of sky about as large as ten full Moons and it is able to detect and catalogue objects over the whole southern sky with a sensitivity that is forty times greater than achieved with earlier infrared sky surveys. This jump in observational power is comparable to the step in sensitivity from the unaided eye to Galileo’s first telescope, and will reveal vast numbers of new objects and allow the creation of far more complete inventories of rare and exotic objects in the southern sky.

Professor Keith Mason, Chief Executive of the STFC, commented: “This cutting edge, UK-built telescope will give us unparalleled observing of the southern skies and will build on the UK’s position as a world leader in survey astronomy, allowing our researchers to address many of our key astronomy questions.”

Professor John Womersley, director of science programmes at STFC, said: “The handover of Vista marks a major milestone for UK astronomy, strengthens our relationship with ESO and enhances our capabilities in an area of science where the UK has a particular strength.”

Professor Emerson and Dr Sutherland are looking forward to a rich harvest of science from the new telescope. “History has shown us that the most exciting things that come out of projects like VISTA are what you least expect,” Professor Emerson adds, “and I’m very excited to see what these will be!”