A renowned plant biologist from Queen Mary, University of London has received two new honours for his research on small plants called bryophytes. 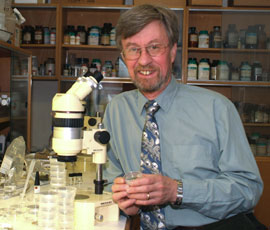 Jeffrey Duckett, who is Professor of Botany, is to become a Scientific Associate at the Natural History Museum. This means he will be given full use of the museum’s world-class facilities to help with the museum’s research and his own.

At the same time Professor Duckett has been elected President of the International Association of Bryologists receiving votes from countries as far afield as as Australia, China, Hungary, India, Japan, Russia and the USA.

These two new distinctions follow hot on the heels of the Linnean Society medal for Botany, which Professor Duckett received last year.

Bryophytes which include mosses, liverworts and hornworts have a major role in ecosystems from Antarctica to the Amazon and have the remarkable property of being able to cope without water for long periods of time.

Professor Duckett has studied the ecology, evolution and physiology of these primitive land plants across the globe. His particular interest is in understanding how the plants survive in dry conditions, which may hold the key to developing more drought-tolerant crop plants. He is also interested in the dramatic increase in London’s bryophyte biodiversity since the Clean Air Acts of the 1950s and 60s and the development of 'Green Wall' technology using mosses.