There is a genuine risk that if pushed too fast to reduce public sector debt we could head into another severe down turn, argued Robert Peston during his lecture at Queen Mary, University of London on Wednesday 28 October. 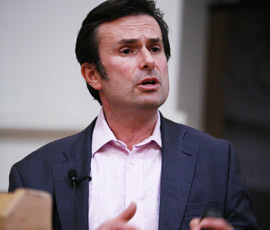 The award-winning business journalist spoke to some 200 economics students at the College’s Mile End campus on the cause and effects of the recent financial meltdown, which he described as “a tsunami of events crashing through the markets”.

In addition to highlighting the future issues we face on public sector borrowing and cuts, Peston also gave his perspective on the “borrowing and lending binge” and the complacency that banks and government have shown towards the ‘boom and bust’ effect.

He said: “Most people behaved as though cycles had been abolished. Banks fed this desire for borrowing. Banks lent too much compared to their capital resources. No one checked if the borrowers were good for the money.”

“What has happened blows apart the notion that we can trust financial elite to get things right. Governance in this area has been appalling,” he added.

His attention also turned to bankers’ bonuses and taxpayer bail outs, which he said were “exceptional measures to jumpstart the economy”.

“£1.3 trillion of support was given by the taxpayer to prop up the banks. That’s a fraction less than everything we produce in this country,” he revealed. “At present it’s not remotely clear when or how we can withdraw this level of support.”

Robert Peston is son of economist Lord Maurice Peston, who was Emeritus Professor and founder of the Department of Economics at Queen Mary.

Speaking of his father’s close association with the College, he said: “He takes great pride in how Queen Mary continues to go from strength to strength especially the impressive, thriving Department of Economics.”

“This is a fantastic time to be studying in this field,” he noted enthusiastically to the students present.

Robert Peston has been a business and current affairs journalist for over 25 years. He is perhaps best known for a series of exclusive stories about the global financial meltdown and the UK recession, including his scoop on the Northern Rock crisis.