Ashley Banjo, a science student at Queen Mary, has led dance act Diversity to victory in the Britain’s Got Talent final. 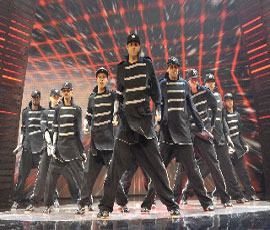 The 11-strong dance sensation beat favourite Susan Boyle to the £100,000 prize after winning the TV talent show on Saturday night.

The final was seen by 19.2m viewers – the biggest TV audience for a single programme in seven years.

All the members of Diversity, winners of the 2007 UK Street Dance Championships, come from east London and Essex.

Group leader and choreographer Ashley, 20, is a second-year physics student at Queen Mary. He formed the all-boy dance troupe two years ago at his mother's street-dance studio in Dagenham, Essex.

Ashley told the BBC on Sunday that he really didn't expect to win at all. "We still haven't quite got our heads around it," he added.

"I had my speech ready to congratulate Susan, and when they said Diversity my legs actually gave way - and I'm really tall, so it's a long way to fall!"

Diversity will now take part in the Britain's Got Talent tour along with the nine other finalists next month. They will also entertain Her Majesty, the Queen at the Royal Variety Show in November.

Ashley reveals that Diversity's first ever dance performance was inspired by the death of a family friend, Sylvia Lewis, from cancer. She mentored the group before she lost her battle with the disease in 2006.

"That piece started with a quote from Martin Luther King - 'I have a dream' - and that really is our slogan. Our dream is being achieved."