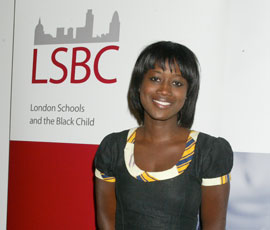 Graduating this year with a masters in Material Engineering in Medicine, Nanayaa also took part in dance and fitness classes and is a keen member of the National Society of Black Engineers. Having been consistently amongst the best of her group throughout her degree, Nanayaa has graduated as the top student in her year gaining the highest mark in Engineering

At the end of her third year, Nanayaa was selected for a prestigious work experience placement at Inno-Bio-Diagnostics in Malaysia where she excelled. She has been a student ambassador as well as winning three achievements awards and being nominated by Queen Mary for both the Royal Charter Award and the RH Craven Award.

Speaking at the award ceremony on Friday, Abbott said: "The students this year are better than ever. Not only have they achieved some of the best grades in the country they’ve done it whilst learning to speak English for the first time, looking after the elderly in care homes, volunteering in soup kitchens and even overcoming learning difficulties. These awards show that contrary to popular opinion, Black students are amongst the best in the country. Black students are not just trouble-makers or NVQ-takers, they are the lawyers, doctors and leaders of tomorrow."

Also short-listed for an award was Jelili Ademilola Oshindele, who graduated this year with a first class honours degree in Mathematics. He was a student ambassador for Queen Mary, including giving presentations to school students to encourage them to go into further education. As well as helping with outreach activities, he has also given up his time to volunteer for charities. Ademilola’s dedication to his degree saw him studying over the summer holidays in order to excel during term-time.