Queen Mary, University of London has won the ‘Social Responsibility’ category of the Green Gown Awards 2009. The announcement was made at a prestigious gala dinner held at the Imperial College London on 23 June. 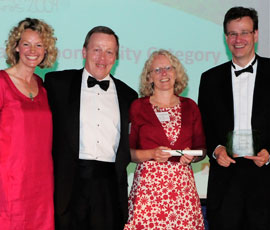 Administered by the Environmental Association for Universities and Colleges (EAUC), the Green Gown Awards recognise exceptional initiatives being undertaken by universities and colleges across Britain to become more environmentally and socially sustainable.

Queen Mary beat five other universities to scoop the ‘Social Responsibility’ category with its ethical initiative to bring its non-residential cleaning service back in-house, ending 15 years of outsourcing to contractors.

Award recipient and project lead, Dean Curtis, Chief Administrative Officer at Queen Mary, said: “It’s an honour to be recognised with such an prestigious award; taking responsibility for low paid contracted staff is the right thing to do and I hope our story inspires other employers to follow suit.”

Prior to the initiative, Queen Mary was similar to other public and private sector organisations in London in using contract companies to undertake low-paid services such as cleaning and catering.

However, ESRC-funded research conducted by Queen Mary’s Department of Geography exposed the extent to which subcontractors pay their staff just the minimum wage without additional employment benefits, leaving their workers disadvantaged and struggling to make ends meet in London - a city with a high cost of living.

“On the back of these findings, we took the decision to reintroduce an in-house cleaning team, giving them the same pay and conditions as Queen Mary employees, and as a result became the first ‘Living Wage’ campus in the UK,” added Mr Curtis.

Since inviting all contracted cleaners to transfer to its employment on 1 January 2008, the College now provides training, appraisal and career development opportunities for 100 cleaners.

Wages are 48 per cent above the national minimum wage (£8.68 an hour as opposed to £5.73), and even beat the London ‘Living Wage’ (£7.60 an hour) - and cleaners have access to all the benefits of Queen Mary employees.

An independent survey, conducted one year after the scheme began, found that 68 per cent of former contract cleaning staff worked more productively after becoming Queen Mary staff, and many cited the provision of better equipment and more supportive supervision as key components of this improvement.

“The initiative has improved cleaning standards and productivity without prohibitive costs; it has also enhancing Queen Mary’s reputation as a good employer in the local community; as an ethical institution in the eyes of students; and as a beacon for other employers nationwide,” added Mr Curtis.

Now in their fifth year, the awards have 12 various categories - from Green ICT to Carbon Reduction - which nearly 100 institutions entered to illustrate their achievements, in both academia and estates management.

Shortlisted applicants underwent a rigorous assessment, involving 30 expert judges drawn from a range of relevant institutions including the Carbon Trust, the Learning and Skills Council and Universities UK.