Queen Mary law alumna Riam Dean was named Disabled Young Person of the Year at the Human Rights Awards held by RADAR, the Royal Association for Disability and Rehabilitation, on Tuesday 1 December 2009. 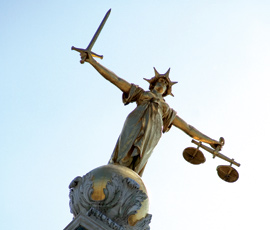 Dean, who wears a prosthetic arm, recently won a court case against her former employer Abercrombie & Fitch after claiming the clothes store had taken her off the shop floor because of her false limb.

A central London tribunal ruled that Abercrombie & Fitch failed to comply with employment law and awarded Riam £8,000 for unlawful harassment.

Speaking to The Lawyer magazine, she said: “I realised that I was not only fighting for me but for standing up for the rights of every other disabled person who has been discriminated against.”

Dean, who has just finished her Bachelor in Laws (LLB) at Queen Mary, said she was determined to make a stand despite Abercrombie and Fitch having the best legal representation as “such a huge company”.

The 22-year-old now plans to do a Master’s in Human Resources and employment law so she can “prevent the same thing from happening to anybody else”.

Commenting on his former student’s latest achievement, Professor Peter Alldridge, head of the Department of Law at Queen Mary, said: “We are enormously proud of Riam. Efforts to prevent discrimination against people with disabilities need champions like her. We wish her all the best for the future.”