Law students at Queen Mary have been highly commended in three out of the four categories of a prestigious legal award scheme. The annual Attorney General Student Awards were set up four years ago to recognise pro bono (free) work undertaken by law schools and their students to benefit local communities. 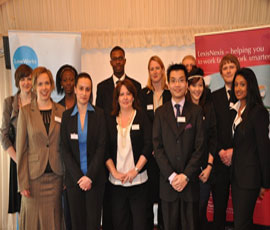 The awards are sponsored by the Attorney General, the Government’s chief legal adviser, Baroness Scotland who announced the winners and runners up at a ceremony on 31 March 2009 at the House of Lords.

Queen Mary’s Pro Bono Group was highly commended in the ‘Best New Pro Bono Activity’ category, which it won in 2008, for its new ‘Pink Law’ service, which sees students, supported by top City lawyers, offer free legal advice on issues such as civil partnership and employment discrimination to people from the lesbian and gay community.

Launched in 2006, the pioneering Legal Advice Centre is based at Mile End. The Centre was the first of its kind in London when it opened to the public in 2006 and has since provided free advice to hundreds of clients on all sorts of legal issues.

The news comes just months after the Legal Advice Centre was shortlisted in the Pro Bono category of the Law Society Excellence Award in Social Responsibility 2008.