Queen Mary is to host a one-day symposium, ‘Van Dyck and Seventeenth Century Britain’, in conjunction with Tate Britain on Friday 6 March 2009. 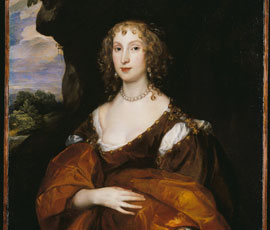 The day-long event celebrates the opening of Van Dyck and Britain, the Tate’s blockbuster exhibition on Flemish Master Sir Anthony van Dyck, which runs from 18 February to 17 May 2009.

Kevin Sharpe, Professor of Renaissance Studies at Queen Mary is acting as historical advisor on the Van Dyck retrospective, which features loans from The Royal Collection and The National Trust and explores the context of Van Dyck’s key English works when he reigned supreme as principal painter to the court of King Charles I.

Professor Sharpe has also co-organised the first symposium at Queen Mary with the exhibition’s curator Karen Hearn. “A score of renowned scholars will take part in a series of lectures and panel discussions throughout the day, debating how Van Dyck’s iconic representations of his chief patron Charles I have shaped our view of the Stuart monarchy and his legacy on ensuing British art,” said Professor Sharpe.

‘Van Dyck and Seventeenth Century Britain’ is being held on Friday 6 March 2009, from 9.15am to 6.45pm in The Octagon, Queens' Building, Queen Mary, University of London, Mile End Road, London, E1 4NS. A reception follows at 6.45pm.

Tickets are £30 per person (which includes entry into the Van Dyck and Britain exhibition at Tate Britain). For tickets and information, visit: www.qmul.ac.uk/events/ or call 020 7882 5147.

Tickets are £25 (£20 concessions). The price includes a private view of the exhibition on Thursday 26 March. As booking is required please visit: https://tickets.tate.org.uk/selectshow.asp or call 020 7887 8888.