Queen Mary, University of London, presents the UK stage premiere of Miss America, a witty critique on the dissolution of the ‘American Dream’, which runs from 21 March to 23 March. 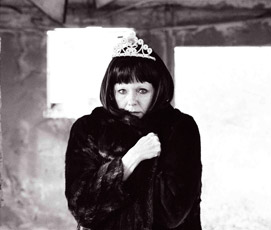 Written and performed by Peggy Shaw and Lois Weaver of Split Britches, the contemporary lesbian theatre company, Miss America is set in the context of a beauty pageant, held on a landfill, in the eye of a giant storm.

The play imagines the unlikely world in which an 80-year-old woman with no conventional talent could win the all-American contest.

“The reverberations of such an unlikelihood are reflections on the current state of America, human relationships and women as illustrated by the morals and ideals upheld by the modern Miss America competition,“ explains Lois Weaver, Professor of Contemporary Performance Practice at Queen Mary.

“The piece exposes what is lost in a society that is still hopelessly clinging to winning and also looks at what it means to ‘miss’ America, juxtaposing the glamour of pageantry with the despair of recent American tragedies like Hurricane Katrina,” she added.