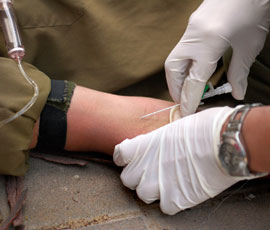 In ‘Medicine Under Pressure: The Law and Ethics of Medicine in Conflict Situations’ a panel of distinguished legal and philosophical minds will discuss the professional regulation of doctors at work in combat, occupation and humanitarian relief settings.

Bioethics expert Professor Richard Ashcroft, of Queen Mary’s School of Law, will talk about the dual loyalties of doctors and other healthcare workers in military and government service. He will focus in particular on the responsibilities they have for the human rights of their patients.

“Given the recent revelations of the International Committee of the Red Cross inspections of Guantanamo Bay, and US President Obama’s publication of the ‘torture memos’, as well as allegations of British involvement in ‘harsh interrogations’ in Pakistan, this event is a timely examination of the fundamental legal obligations of health professionals in conflict situations; and of the stress and difficulty of their humanitarian calling,” said Professor Ashcroft.

Phil Shiner, a specialist in international, environmental and human rights law and Partner at Birmingham based Public Interest Lawyers, will focus on the prosecution of medical breaches of human rights in the Iraq occupation. He will cite cases where medics have ignored relevant professional standards by, in effect, certifying detainees fit for interrogation.

An award-winning solicitor, Shiner gained a controversial reputation after representing the Campaign for Nuclear Disarmament, challenging the Government’s decision to go to war, and fighting against the Ministry of Defence for families of soldiers killed in Iraq.

He is best known for his work on behalf of Iraqi civilians for human rights violations committed by British Forces during the Iraq Occupation; cases such as that of Baha Mousa, a hotel worker with a young family, who was beaten and killed by British occupation troops in September 2003.

Phil Shiner won Human Rights Lawyer of the Year 2004 and inaugural Law Society Solicitor of the Year in 2007.

The event will be chaired by Malcolm Evans OBE, Professor of Public International Law at the University of Bristol. Professor Evans’ research interests include the international protection of human rights, with particular focus on the freedom of religion and the prevention of torture.