Celebrating anniversary in Paris with a spot of Naked Lunch

Fifty years after the first edition of cult novel Naked Lunch rolled off the presses in France, the University of London Institute in Paris (ULIP) is holding a series of events to mark the occasion. 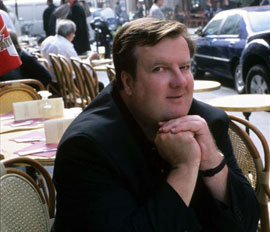 Celebrations begin with a book launch on Tuesday June 30. Naked Lunch @50, edited by Oliver Harris and Ian MacFadyen, is the first ever collection of essays on William Burroughs’ seminal novel.

“First published in Paris by Olympia Press in 1959, Naked Lunch is a milestone publication in the history of American literature. A controversial take on America’s post-war consumerist society, the novel was banned in many regions of the US due to its often disturbing subject matter and use of obscene language,” explains Professor Andrew Hussey, cultural historian and Dean of ULIP.

More than 20 writers, scholars, musicians and artists have contributed to the anniversary book, including academics from ULIP and acclaimed singer and writer Eric Andersen, who will give a special concert on the launch night.

Oliver Harris, professor of American Literature at Keele University and leading scholar on William Burroughs, will also attend the launch, which he has co-organised with Professor Hussey.

The homage to Burroughs and his literary masterpiece continues into July, with a three-day symposium (1-3 July), featuring international scholars and writers, as well as exhibitions, concerts, readings and performances, all take place at ULIP.

The events, which will be featured on France Culture (the equivalent to BBC Radio 4), have attracted several French literary giants including the novelists Philippe Sollers and Jean-Jacques Schuhl, winner of the 2000 Prix Goncourt literary award.

There will also be a tour of key sites in Paris that influenced Burroughs’ time in the city during the 1950s. One highlight is Rue Git-le-Coeur, the home of the old Beat Hotel – the destination for avant garde artists and writers of the era - and the place where Burroughs completed Naked Lunch.

“All these events will take place on the left bank of Paris, only a few hundred yards from where Burroughs, 50 years earlier, completed the manuscript of Naked Lunch. This celebration of Burroughs’ great work makes the streets of Paris the place to be this summer,” said Professor Hussey.

ULIP, now a cutting-edge centre for international level research, undergraduate and postgraduate teaching in French-related studies, was incorporated into the University of London 40 years ago. It is closely affiliated to the School of Modern Languages at Queen Mary, University of London.