A specialist in early 20th-Century English Literature at Queen Mary, University of London has won a coveted Philip Leverhulme Prize for his book Touch and Intimacy in First World War Literature. 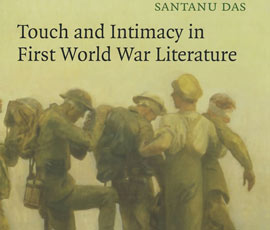 Dr Santanu Das received the £70,000 award in recognition of the exceptional research he undertook to produce his acclaimed book. Touch and Intimacy recovers and analyses the sensuous world of the First World War trenches and hospitals and the literature it produced through extensive archival and historical research.

Philip Leverhulme Prizes reflect the commitment of the Leverhulme Trust to reward outstanding young scholars, and provide significant resources that prize winners can use to further their studies.

Dr Das, who is a Senior Lecturer in the Department of English, received the Leverhulme Prize in the same year that he was awarded a Draper’s Prize for excellence in teaching.

Professor Michèle Barrett, Head of the School of English and Drama at Queen Mary, the first to congratulate Dr Das, said: “His research marries imaginative and cutting-edge ideas with an impeccable standard of scholarly detail and rigour - a combination characteristic of English at the College.”

Dr Das’ research interests are in early 20th-Century English and colonial literature, art and culture with a focus on the First World War as well as in theories of the body and the senses.

He is presently working on Commonwealth literary responses to the First World War with a focus on India, and editing a collection of essays titled Race, Empire and Writing First World War for Cambridge University Press. In 2010, he will give the British Academy Chatterton lecture on English poetry.