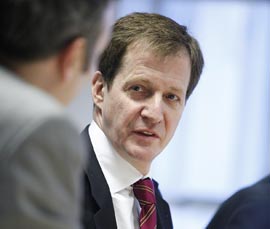 From 10.45am until 12 noon, Mr Campbell spoke to 20 students at the College as part of a cutting-edge new undergraduate course ‘The Blair Government’, teaching the recent history of Tony Blair’s ten years in office.

Launched in September 2008, ‘The Blair Government’ course is led by Tony Blair biographer and Independent on Sunday writer John Rentoul and Dr Jon Davis, executive director of the Mile End Group, a research group at Queen Mary formed by postgraduate students of Professor Peter Hennessy, a political journalist and renowned lecturer in contemporary British history at the College.

Giving his own ringing endorsement, Alastair Campbell described the course as “ground-breaking” and said he was “delighted to be able to contribute”, adding that he was “impressed by the enthusiasm and the depth of knowledge of the students”.

For more than one hour, Mr Campbell discussed New Labour’s transformation of government communications; the notion of ‘spin’; and his working relationship with Tony Blair.

He also answered questions from students on key issues such the impact of 24/7 media on British politics; and the government’s media strategy for critical incidents such as the terrorist attacks of September 11, 2001.

When asked why he decided to work for New Labour, Mr Campbell responded: “I knew it would be life-changing, all-consuming, but there are some challenges you just can’t say no to.”

Alastair Campbell became Tony Blair’s chief press secretary and official spokesperson in 1994. A former political reporter, and often described as one of the most influential political communicators of modern times, Alastair Campbell played a key role helping to create New Labour and return the Party to power in 1997.

After helping the Labour leader win a second landslide election victory, he became director of communications and strategy at Number 10 until he resigned in September 2003.

With its reputation for rigorous study of politics and the media ‘The Blair Government’ course is attracting a string of other big name lecturers including former Downing Street Chief of Staff Jonathan Powell; Sir Kevin Tebbit, former Permanent Under-Secretary at the Ministry of Defence and Sir David Omand, formerly Director of the Government Communications Headquarters and Permanent Secretary at the Home Office.

Dr Davis believes the course has a winning formula for students, with direct access to leading Whitehall figures and an unparalleled insight into the workings of the Blair government.

“We are also taking a progressive approach to the method of teaching, with lectures and group discussions recorded and published on a wiki-style website and all course updates posted on Facebook,” he added.