The Arts and Humanities Research Council (AHRC) has awarded Queen Mary, University of London, £2.9 million to support masters and doctoral students in the arts and humanities. 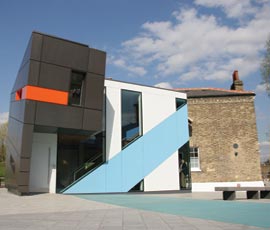 This substantial award, allocated through the AHRC’s new Block Grant Partnership (BGP) scheme will provide 74 studentships over the next five years.

The AHRC last year invited bids under the new scheme, the results of which were recently announced.  Queen Mary was one of just five universities whose bid was rated ‘excellent’ by the academic peer review panel in what the AHRC has termed a ‘highly competitive context’.  Our academic peers praised the ‘excellent training and supervision’ that Queen Mary’s graduate students receive, while Philip Esler, Chief Executive of the AHRC, lauded the College’s ‘strategy and vision’ in developing its postgraduate research culture.

Essential to that strategy was Queen Mary’s decision in 2003 to create sectoral Graduate Schools, an innovation that put us well ahead of other research-led UK universities in supporting graduate students.  As a further strategic investment, the College has in recent years awarded more than £2 million per annum for master’s bursaries and research studentships.  Queen Mary has been attracting increasing numbers of graduate students, with now more than 1,300 in the humanities and social sciences alone.

Professor Trevor Dadson, Vice-Principal for the Humanities and Social Sciences, welcomed the AHRC’s recognition of Queen Mary’s excellence, adding that graduate students were an essential part of the College’s mission to be at the forefront of research, discovery, and knowledge transfer across a wide spectrum of disciplines.  “Training the next generation of scholars, intellectuals and public policy leaders is at the heart of everything that we do and a privilege that we take most seriously,” he added.

The BGP award to Queen Mary will support graduate students in a wide range of disciplines: Cultural Studies, Drama, English, Film Studies, History and Linguistics.  The College is currently inviting applications from outstanding prospective graduate students to compete for these prestigious awards.