Edward Oliver is a cartographer and web manager in the School of Geography and has worked at Queen Mary for 28 years. Alongside producing maps and diagrams for publication in journals and for teaching purposes, he also has worked extensively with QMUL’s Green Mary campaign, and even won the ‘Green Mary hero’ award. 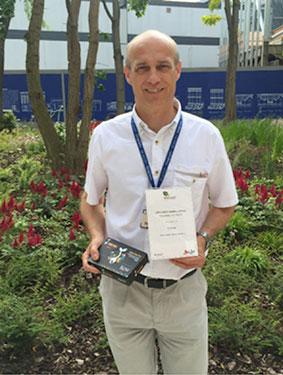 You’ve worked at QMUL for 28 years, and are the longest serving staff member in the School of Geography. What has made you stay at the university so long, what do you enjoy about working here?

Long service is not unusual in the School of Geography and I have some way to go to catch several now-retired staff! I have stayed partly because university cartographer jobs are fairly few and far between, but much more importantly because Geography has always been a pleasant and friendly place to work where the contribution of support staff is appreciated. Add to that the interesting research work of the academics, the fact that I can see each job through from start to finish, and the lively atmosphere provided by the students and who would want to go elsewhere?

Tell us about your work as a cartographer. How has this changed with the introduction of new technology?

Maps and diagrams were drawn by hand in pen-and-ink when I started at Queen Mary in 1988. Some of the equipment we had here was old even in those days, particularly the lettering machine with no keyboard or memory – you had to take its output into a darkroom to be developed on stripping film before patching the individual words on to your artwork. However it was already clear that computers held the future of mapmaking and I got my first Mac in 1989 (with a 40mb hard disk!). I still use Adobe Illustrator for final output of most of my drawing jobs, and the cartographic industry has been further changed by the development of Geographical Information Systems (GIS) software and the internet. I sometimes miss the satisfaction of drawing by hand but this has been replaced by knowing that with the click of a mouse you can instantly make design changes that would have taken hours to accomplish manually.

What projects are you working on at the moment?

Currently I am drawing maps and diagrams for a Modular River Physical Survey for Citizen Scientists Field Guide booklet, co-authored by two geography academics. I’m also integrating the text and images using InDesign page layout software and then it will be printed on water-resistant paper. Professor Jane Wills is writing another book, which will provide me with plenty of work if the last one is anything to go by. There’s always a steady flow of work for the various book chapters and journal articles the academic staff are working on. I also update the School of Geography website, which is a job that never ends.

Congratulations on getting a “Green Mary Hero” award earlier this year. What have you enjoyed about being involved in Green Mary and the sustainability in the School of Geography? What kinds of things have you done?

Thanks – the Green Mary scheme fitted in with some of my outside interests. Having an allotment for twenty five years has made me a keen composter and wormery keeper, so I divert food waste from the School of Geography kitchen to the facilities we now have at the new Queen Mary allotment raised beds behind Beaumont Court. Among other things we also run a Fairtrade Fortnight event and last year raised money to ‘twin’ a School of Geography toilet with newly-built hygienic facilities in Guatemala. I’m also good at switching off the lights in empty rooms!

We’ve been told one of your sons, Matthew, is a horticulturalist. Tell us a bit more about his giant vegetable growing.

Matthew works at the RHS Hyde Hall garden near Chelmsford. This year the seed company Thompson & Morgan enlisted him to grow a giant pumpkin from a very expensive seed. After 149 consecutive days of care and attention the pumpkin weighed 1,333.8lb, a UK record for an outdoor-grown pumpkin. It will be on display among other pumpkins, squashes and gourds, at Hyde Hall from Saturday 22 October to Sunday 30 October.

What do you enjoy doing in your free time?

We moved house in September, so my main hobbies of allotment gardening and playing club cricket are temporarily on hold. We now have a bigger garden, so I’ll still be growing some vegetables – and there will be plenty of DIY jobs at our new place.