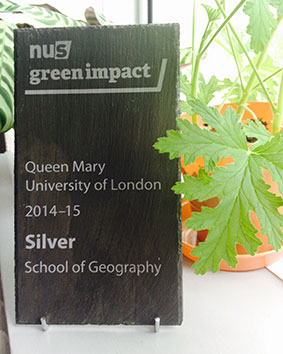 The School of Geography at Queen Mary University of London has achieved a Silver Award for its efforts to make the school more sustainable as part of the National Union of Students’ Green Impact scheme.

From reducing the amounts of paper used for printing to switching off lights and computers, saving water to keeping a wormery, the School of Geography’s green impact team has been making improvements year-round since achieving Bronze status in 2014.

Green Impact Coordinator in the School of Geography Edward Oliver said it had been great to get students involved in the scheme too. “We held a chocolate, tea and coffee tasting event for Fairtrade Fortnight this year which was very popular with staff and students. Meanwhile, our Geography Society helped run a cake stall for Breast Cancer Awareness Month’s ‘Wear it Pink’ campaign.”

The Green Impact scheme encourages university departments to get involved in charitable activities too. As well as the bake sale, the School held a Christmas raffle for Medecins sans Frontieres. 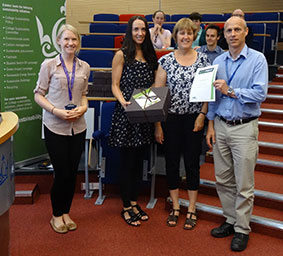 The Green Impact Scheme has been run by the National Union of Students since 2006 and involves more than 60 universities across the UK – that’s more than 1,500 individual teams. Queen Mary University of London Students’ Union supports a number of student-led initiatives each year for the campaign, including the Foodbank Volunteering Group which provides volunteers and collects food donations for Bow Foodbank (based at St Mary and Holy Trinity Church on Bow Road).

Geography graduate Bronwen Eastaugh – who works as a Volunteering Coordinator at Queen Mary Students’ Union (QMSU) – said the response from QMUL’s sports clubs and societies had been overwhelming. “When we first suggested collecting food donations for Bow Foodbank, we had no idea just how much the students would get involved,” she said. “During Green Mary Week – where the Union puts on activities to promote a low-carbon future for QMUL – students collected more than 1,000 donations. That’s enough items to keep the Foodbank going for two weeks – so we were very proud of our students’ commitment to this cause.” 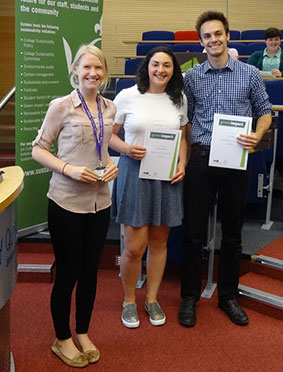 Meanwhile, geography student Rosemary Cargill has been involved in the Green Impact scheme as a project assistant in the Principal’s Office Team. “Working on Green Impact has given me some great skills such as working to deadlines and communicating with a team. But the Green Impact scheme also gives me a chance to put what I’ve studied in geography into practice,” the second-year student said. Rosemary also trained to become part of the audit team. “By being part of the audit team I had a day of training with the Institute of Environmental Management and Assessment (IEMA) which is great for skills and my CV too.”