Congratulations to the class of 2015 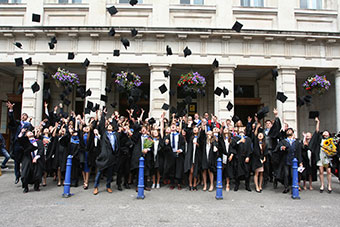 More than 100 students from the School of Geography threw their hats to the air and celebrated in the sunshine last week at Queen Mary University of London’s graduation.

The Class of 2015 were reunited as they gathered at the university’s People’s Palace to receive their degrees in geography, environmental science as well as those with joint honours in business management too.

Family and friends joined the celebrations afterwards in the university’s historic old library – the Octagon – and the Pimms Tent was welcomed back to Geography Square. 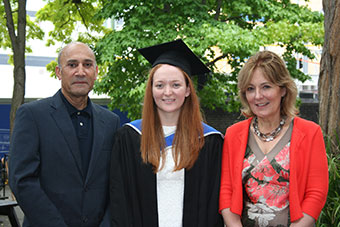 Georgie Baker with the Tavana family 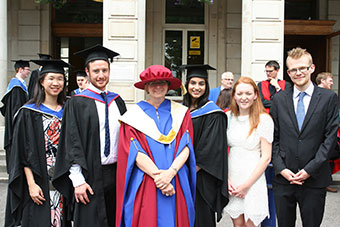 BA Geography graduate Georgie Baker from Suffolk won the Simon Tavana Writing Prize for a 17,000-word field trip diary she wrote during the Los Angeles field trip which is part of the ‘Urban Futures’ module. "We wrote about our reflections of the city every day when we were away. I’ll always remember halfway through the trip we went up to the Griffith Observatory which is right by the famous Hollywood sign. You can see what you think is all of LA, but having been on the trip and already been to places like Skid Row which has a large homeless community, I knew it wasn’t the whole story, and this economic divide is what the field class is all about,” Georgie explained.

BSc Geography graduate Cheryl Briars from Oxfordshire won awards for her independent geographical study – an appraisal of a river restoration and flood alleviation scheme in south east London. “When river sediment builds up, it doesn’t only pose a flood risk, but it traps heavy metals which can cause other environmental problems,” she explained. “I did a lot of lab work at QMUL analysing samples and reviewing data and found that the water and sediment quality had improved during the ten-year period of the scheme.” 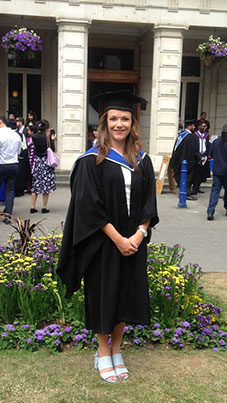 Her supervisor, Professor Geraldene Wharton, said it was wonderful to see Cheryl’s enthusiasm and hard work rewarded. “During the past year Cheryl has excelled in her independent research work and her first class independent geographical study is currently being prepared for formal publication which is really excellent news.”

Graduates from the School of Geography were also recognised for overall top academic achievement in their final year by Queen Mary University of London:

Head of School Professor Alison Blunt said she and colleagues were delighted to celebrate the success of QMUL Geography’s students. “Our graduates should feel very proud of all they have achieved in terms of their hard work, their enthusiasm for the subject, and their contributions to the life of the School,” she said. “It has been a pleasure to teach them during the past three years, and we wish them the very best for the future. We look forward to welcoming back those students who are returning to study for a Masters degree and to keeping in touch with everyone else via our alumni networks.”