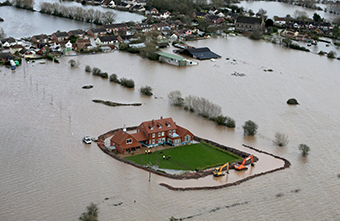 Workers build flood defences around a resident’s house in the flooded village of Moorland near Bridgwater on the Somerset Levels on February 10, 2014 in Somerset, England. Source: Matt Cardy/ Getty Images

Abstract: Freshwater flood damages have increased dramatically over recent decades, and are of concern to millions of people living in flood-prone areas across the world. The controversy over what caused the dramatic flooding in parts of the UK earlier this year exemplifies our lack of understanding of flood hazard drivers. Most often, we assume that trends in flood hazard are caused exclusively by changes in hydrology and climate.  However, widespread anthropogenic influences on river systems have caused changes in the capacity of river channels which can also modify flood hazards. In this talk, I will demonstrate that flood risk can only be fully understood by taking both hydrologic and geomorphic changes into account, through an analysis of changing flood hazards at hundreds of rivers across the USA.