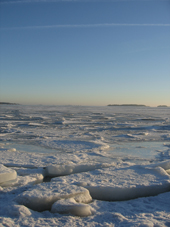 This lecture will look at our current understanding of Arctic Ocean sea-ice, temperature, and climatic history, and discuss how it can be used as a framework for understanding future man-made changes to the climate in the Arctic.

Sea-ice history reconstructed from fossils preserved in Arctic Ocean sediments is revealing its significant sensitivity to relatively small-scale changes in the climate. New studies reveal substantial variations in sea-ice cover during the last several million years. For example, periods of seasonally sea-ice free conditions in at least some regions of the Arctic include the early Holocene (about 7,000–10,000 years ago), the last interglacial period (~125,000 years ago), Marine Isotope Stage 11 (~400,000 years ago) and the middle Pliocene (~3 million years ago). Arctic sea-ice, past, present and future will be the focus of this public lecture at QMUL.

Tom Cronin has been a research geologist at the US Geological Survey since 1978, conducting research in paleoclimatology, sea-level change, biostratigraphy, geochemistry and ecosystem history, in continental shelf, estuarine and deep-sea environments. He participated in the Integrated Ocean Drilling Program ACEX expedition to central Arctic Ocean in 2004. More recently he has been Project Chief for the ‘Abrupt Climate Change: Eastern US’ project and a contributor to the ‘South Florida Ecosystem Project’. He is the author of more than 180 journal articles and an excellent book, Paleoclimates: A Context for Climate Change (Columbia University Press, 2010). He also worked with the Clinton Administration on the Kyoto Climate Treaty. In 2009 Tom was awarded the Brady Medal of The Micropalaeontological Society in recognition of his achievements. Two particular research are highlighted here. Tom’s 1997 Nature paper, co-authored with Maureen Raymo, showed for the first time that the diversity of deep ocean benthos has varied on geological timescales related to glacial-interglacial cycles and ultimately linked to the 41,000 year obliquity cycle. Secondly, Tom recognised and developed the potential of the marine ostracod Acetabulastoma arcticum as a proxy for sea-ice cover, supporting the idea that much of the Arctic was seasonally ice-free only 7,000 years ago during an early Holocene thermal maximum. This research has informed concerns about the rapid melting and disappearance of Arctic sea-ice over the past decade.