The Potential of Random Selection: In Society and Higher Education

Jeffrey Kennedy, Lecturer in Criminal Law, School of Law, provides a summary on Innovating Student Democracy: The Potential for Random Selection in the University event held in February 2020. 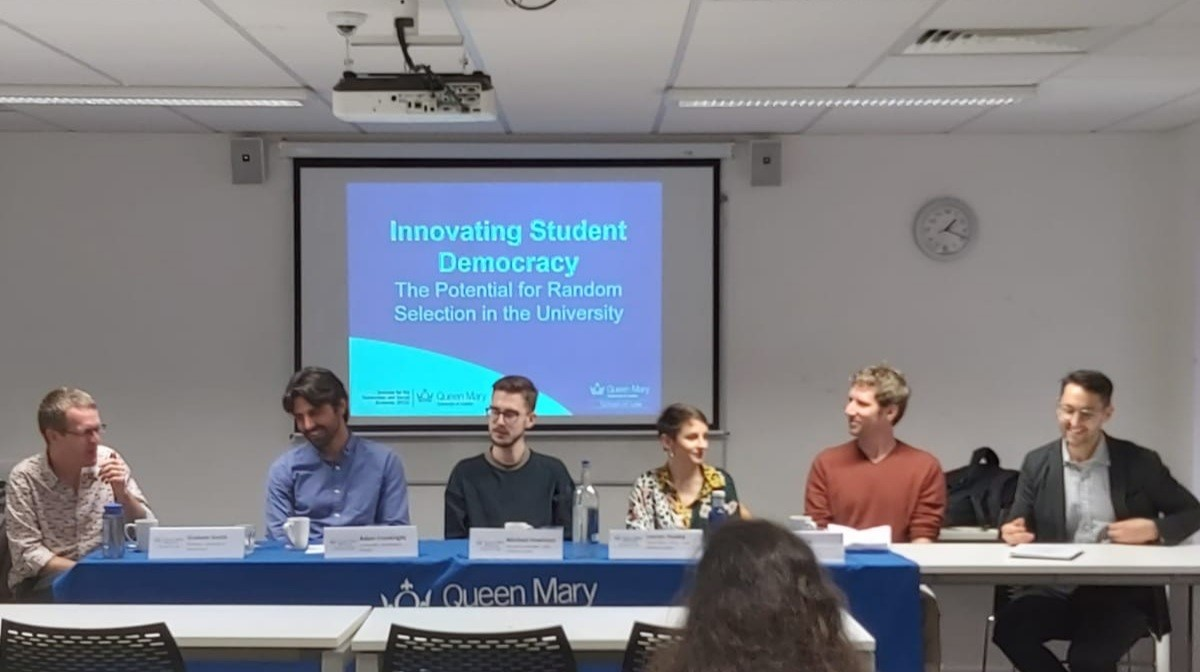 Innovating Student Democracy: The Potential for Random Selection in the University

Innovating Student Democracy brought together academics, students, and those working in student governance for a panel and workshop which together highlighted the educational sector’s budding experience with mini-publics and sought to kickstart a conversation about their potential.

In their presentations, panelists contextualized existing developments within the broader revival of lotteries in politics, discussed the experiences of past projects, and discussed other potential applications within the university setting. Workshop discussions continued these themes in greater depth, explored common themes, and reinforced links among actors within the sector. In all, the events served to both coalesce past experiences across projects as well as spark future developments, both scholarly and practical.

The event was fortunate to feature two projects using random selection in student politics. Adam Cronkright, co-founder of Democracy In Practice, spoke of the organisation’s experimentation with reinventing student governments, primarily at the secondary school level. Challenging the orthodoxy of elections, the organisation has supported several schools in creating student governments populated entirely through lotteries. Leeds University Union (LUU), represented at the event by Michael Hewitson and Lauren Huxley, has taken a progressive approach by using randomly selected panels of students in its “Better Forums” initiative. Three times a year, these 16-member panels are tasked with deciding whether student proposals will become Union policy. Elected representatives attend and provide information, but ultimately the panel is left to deliberate and decide. Both of these projects show that not only is there reason to think that the rationales and benefits underpinning municipal and national innovation are applicable in the educational context, but also that students would support a re-thinking of their roles in addressing problems in the university.

The great thing about student lotteries, Cronkright argued, is that “they don’t discriminate. They give every student an equal opportunity to be involved.” In contrast with the self-nomination and sense of victory that comes with competitive elections, this has meant that students do not come to their roles feeling “exceptional”, but instead have the humility needed for more deliberative and collaborative approaches. It has also meant that new perspectives are brought to bear on shared issues: “representatives come from different social circles and bring different interests and experience to the table.” Similarly, Hewitson indicated that lotteries were seen at Leeds as the best way of ensuring that panels accurately reflected the breadth of the student population.

In both projects, all of this was thought to translate into participatory mechanisms that both effectively deal with the issues they confront as well as contribute to the development of a wider number of students. At Leeds, Hewitson expressed that they have “seen real change made by students and in particular students who wouldn’t otherwise be involved.” Those same students, he added, go on to be more engaged with the Union after having served their term. In Cronkright’s experience, participating students are not only more engaged, but walk away having developed civic capacities that they otherwise would not have. For contexts yet to experiment with lotteries, he said, there is an “incredible amount of leadership potential that is untapped.”

Based on project experience, students have endorsed change. The Leeds project stemmed from a broader review of the way the Union was governed. When asked why they ultimately opted to replace conventional approaches to student engagement, the answer was clear: “We’re led by students” Hewitson said, “and they told us they wanted a change.” Peer-reviewed research on Democracy In Practice’s projects have relatedly demonstrated that students preferred random selection over student elections. Reporting on their experience, students indicated that they find it to be fairer, more participatory, and to produce governments that are more representative and deliberative than those formed through elections.

While this sort of innovative university democracy is fledgling, it was also noted that other initiatives are in the works. For instance, Queen Mary’s own School of Law has recently approved a pilot project that will see a randomly selected panel of law students given the time, information, and support to deliberate and make recommendations on challenges in legal education. The University of Victoria has also been consulting with student associations around the idea of establishing a campus-based citizens assembly to meet and deliberate about topics including democratic engagement. The discussion of experiences, strategies, and best practices would undoubtedly inform any such projects.

The conversation on the potential synergy between lotteries and university democracy might have been be the first step towards experimentation in other institutions as well. Indeed, the Queen Mary workshop attracted one participant who came from the University of Groningen to explore how these ideas might be used at her home university. Marcella Fratescu, herself a member of the university council, is concerned that her university’s current electoral approach has significant drawbacks, including fostering a factional approach to university politics that “impedes innovative cooperation among members of the council.” The use of lotteries, she felt, stands out as a way of addressing this while also encouraging a more participatory approach—one that “engage[s] the student community more in actively shaping the education we receive.” While challenges undoubtedly vary across institutions and countries, the appeal of new approaches along these lines may be widespread.

Outside of practice, the event has also acted as a catalyst for research and writing on the subject. Three participants, Dr. Jeffrey Kennedy, Dr. Simon Pek, and Professor Graham Smith, went on to co-author an Opinion piece, published in Times Higher Education on April 26, 2020. The piece discussed the innovative initiatives and experiences presented at the event and called for greater systematization of democratic innovations within universities. Collectively, the event gave rise to recognition of the need for further research as well. Two participants, Dr. Jeffrey Kennedy and Dr. Simon Pek, have gone on to launch a research project on democratic innovation, student government, and the democratic role of the university.