A Legal Right to Break the Law

In this IHSS blog post, Dr John Adenitire (Queen Mary University of London) discusses the ideas and intentions behind his new book A General Right to Conscientious Exemptions. 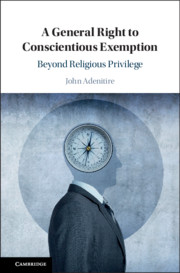 5G conspiracy theorists, anarchists and libertarians have gathered in almost all Western capitals to protest and violate the restrictive laws designed to keep us safe from a deadly virus. My book – A General Right to Conscientious Exemptions – provides these law-breakers with some legal ammunition. I argue that there is a legal right, usually grounded in constitutional and statutory principles protecting religion and conscience, to break the law if this breach is based on a principled belief, even if a misguided one. I show that the legal rights that have traditionally protected pacifists from having to go to war and pro-life doctors from providing abortions have expanded to cover all sorts of other principled law-breakers.

Given that the book gives legal ammunition to individuals that would undermine public health, is it not a dangerous book best forgotten in a dark corner of an unknown library? Perhaps. But before condemning it to this unsavoury fate, you should know that the book gives legal ammunition to perhaps more palatable principled law-breakers. For example, it affords the right to a vegetarian prisoner not to be forced by prison officers to eat meat; it provides the entitlement for a black pupil with an afro not to be expelled for having ‘untidy’ hair contrary to a school uniform policy; it protects a Jewish family when erecting a sukkot in violation of condominium bye-laws. Because the book defends a right that is general, it can be used as ammunition for principled beliefs which are either palatable or unpalatable. While you may not like that 5G conspiracy theorists may use it today, you may be glad that victims of racial or religious injustice may be able to use it tomorrow.

There is another reason why the book should not be forgotten in an obscure library. It was once the case that principled law-breakers could be exempt from legal duties only if their beliefs were religious. So you could avoid having to go to war if you were a Quaker but not if your objection to killing other humans was based on a secular philosophy of human empathy. The book shows that the law across several jurisdictions (I focus on the US, Canada and UK) has evolved to reject this unfair treatment. Principled law-breaking should not be a privilege of religious individuals. If you are worried that this makes the book even more dangerous – now religious as well and non-religious persons can undermine laws that are meant to protect us – don’t worry. As a good lawyer, I have left the fine prints for last.

The book demonstrates that the law empowers judges to decide who can be ultimately exempt from their legal duties. While anti-vaxxers and BLM protesters alike have the legal right to claim an exemption from complying with their legal obligations, judges can refuse to grant exemptions on several grounds, including to safeguard public health and to protect the rights of others. The book shows that sometimes judges can get it right and sometimes get it wrong. My book provides some guidelines to judges to increase their chances of getting it right. This is most than can be asked in an age where confidence in public officials is low. For this alone, perhaps the book can be displayed in a well-lit library.