In October this year, we will be marking Black History Month, an opportunity to celebrate the achievements, contributions and histories of Black people in the UK and around the world. 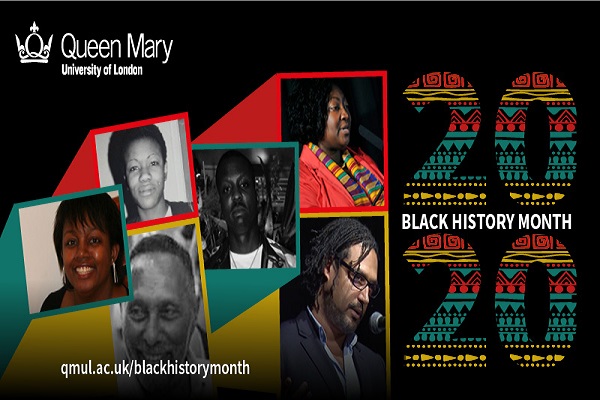 At Queen Mary we will be celebrating Black History Month 2020 with a programme of virtual events, initiatives and communications from 1 - 31 October.

October is with us again – and it is Black History Month!

Black History Month provides a fantastic opportunity to celebrate the successes and achievements of Black people and recognise their outstanding contributions to British life and around the world. It was originally founded to recognise the contributions that people of African and Caribbean backgrounds have made to this country over many generations.

The substantial involvement of Black people are often overlooked or ignored. One such example is the many brave Black servicemen who served in the World Wars, from those grappling in the mud of the Western Front, to the valiant Caribbean pilots and aircrew in the Second World War, and the heroes who fought further afield in places such as Burma. Another is the efforts made by Black nurses, particularly those of the Windrush generation, who helped to build our National Health Service from its inception after the war; a profession that is now led by a Black woman, Professor Dame Donna Kinnair DBE, Chief Executive and General Secretary of the Royal College of Nursing (RCN).

Even though progress has been made in recognising and valuing how Black people have shaped our history and society there is still much to do: the events earlier this year with the death of George Floyd in America and the disproportionate impact of COVID on Black, Asian and ethnic minority communities in the UK, has brought a greater realisation of the size and scale of the challenge in breaking down systemic racism.

October is a chance to look back at our shared history, whilst also looking to the future and being open and honest about what more needs to be done.

I hope that you enjoy the programmes developed by our Students’ Union and colleagues across the University and take the opportunity to learn more about the rich and diverse experiences and contributions that has helped shaped our country and lives.

You can find out more and get involved with our programme of events and initiatives below.