Two cosmologists in the Astronomy Unit in the School of Physics and Astronomy have been awarded prestigious Starting Grants from the European Research Council. 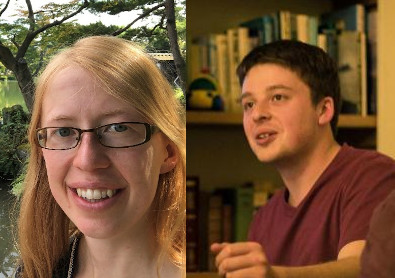 Dr Tessa Baker and Dr Phil Bull will receive a total of over €3 million to help them start their own research groups, providing support for postdocs, PhD students and equipment. Out of 432 awardees — from over 3000 applications —  throughout Europe and associated states, only 14 grants were awarded in astrophysics, so this represents a significant endorsement of world-leading research in astronomy at Queen Mary.

Commenting on the award Dr Tessa Baker, Royal Society University Research Fellow, said: “I’m really thrilled with the award - it will enable me to build my own research group here at Queen Mary, and play a role in the exciting new field of gravitational wave astronomy.”

Dr Phil Bull, Lecturer in Cosmology, added: “The timing of this award really couldn’t be better. We’re about to start receiving a deluge of data from a pair of cutting-edge radio telescopes in South Africa. This support from the ERC will allow me and my research group to really dig into it and start making what we hope will be really fascinating maps of the cosmos that show how it evolved over time.”

“This is a phenomenal achievement for Tessa and Phil” says the Head of the Astronomy Unit, Dr Chris Clarkson. “This substantial funding will give them the freedom and resources build up their own research groups. Coming on the back of a UKRI Future Leaders Fellowship for Alkistis Pourtsidou and continued success in the STFC Consolidated Grants, the Cosmology Group at QMUL continues to develop as one of the leading centres for cosmology in the UK."