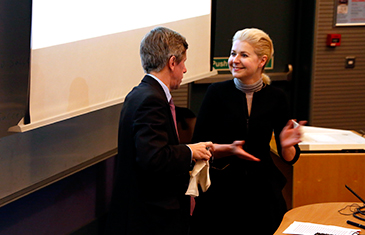 Dr Herchel Smith BSc, MA, PhD, DSc (Hon) died on 20 December 2001. Born in Plymouth, in 1925, Herchel Smith was educated at Exeter College, Oxford University and at Cambridge University. He worked at both universities, with Professor Lord Todd at Cambridge and as a postdoctoral fellow in the Dyson Perrins Laboratory at Oxford. Appointed a university lecturer in organic chemistry at Manchester University, he invented and patented new chemical reactions for the synthesis of novel steroids. Dr Smith emigrated to the United States in the 1950s to work for Wyeth Pharmaceuticals, where his research led to the invention of the first synthetic birth control pills and other hormone therapy treatments.

Dr Smith was a renowned philanthropist. In addition to the original Chair in Intellectual Property, created on the recommendation of the Chartered Institute of Patent Attorneys (CIPA), Dr Smith sponsored additional teaching and research positions at Queen Mary, endowed a number of student scholarships and funded the annual Herchel Smith public lecture in intellectual property.

Dr Smith also supported research at a number of other universities. At Cambridge, in addition to a number of intellectual property research and teaching positions, he endowed the Herchel Smith Laboratory for Medicinal Chemistry, a leading centre for the research and development of magnetic resonance imaging, a Chair of Immunology and the Herchel Smith Chairs of Medicinal Chemistry and Organic Chemistry. Harvard University received similar endowments. The University of Pennsylvania Medical Center in Philadelphia and Williams College in Williamstown, Massachusetts, were also beneficiaries of his generosity.

At Queen Mary, Herchel Smith took an active interest in the activities of the Intellectual Property Research Institute and regularly attended the annual Herchel Smith lecture until ill health made this difficult. Dr Smith made substantial testamentary bequests in support of intellectual property teaching and research at Queen Mary, where his memory will be fondly celebrated.

An obituary for Dr Herchel Smith, written by his former colleague Gerald Hargreaves, is available in the April 2002 edition of the CIPA Journal.

New PhD students undertaking full-time research in the area of Intellectual Property can apply for a Herchel Smith Scholarship to start at the beginning of each academic year. The award covers three years of study while in full time enrolment, subject to satisfactory annual progress reports. The award will cover all tuition fees whether at the Home/EU rate or the overseas rate. It is therefore open to both UK and non-EU applicants. In addition, an award of around £17,000 per year (reviewed annually) will be paid on a regular basis throughout the academic year starting from Septemeber.

Further information on how to apply and additional requirements can be found here.