Two supercomputers have been installed at Queen Mary University of London to support research into deep learning and artificial intelligence (AI). 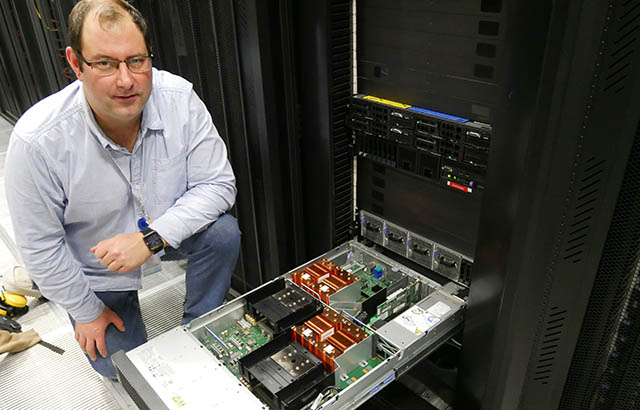 Queen Mary and Newcastle University are the first higher-education institutions in the UK to deploy IBM’s POWER9 system, which delivers an unprecedented performance for modern high-performance computing (HPC), analytics and AI workloads.

The technology will enable academics to further their research into areas including feature tracking through video analysis, the modelling of social networks, predictive models for music and analysis of particle interaction from the Large Hadron Collider at CERN.

Teaching and learning is also set to benefit on courses across the School of Electronic Engineering and Computer Science (EECS) and potentially in areas of the School of Medicine and Dentistry.

This follows the news that Queen Mary became the first university in Europe to install Nvidia’s Deep Learning Supercomputer DGX-1, which is specifically designed for deep learning and big data analysis, back in 2016.

Professor Sean Gong, Head of the Computer Vision Research Group at EECS, said: “QMUL is a world-leader in deep learning research in post-event video forensics and analysis. Deep learning by large-scale convolutional neural networks – a category of neural networks that has been proven effective in areas such as image recognition and classification – has radically changed research into computer vision in recent years.”

He added: “Given our previous test trials on IBM Minsky POWER8 servers, we expect to see significant benefit from the new POWER9 servers for deep learning on big video data.”

The computers will help develop research such as Queen Mary spin-out Vision Semantics' patented computer vision software which was recognised for its role in an innovative CCTV solution last year.

Thomas King, Assistant Director for Research in IT Services at Queen Mary, said: “IT Services is very pleased to have secured access to IBM's early-ship program which will allow our researchers to start developing new machine learning models for the innovative POWER9 architecture.”

“Working with IBM, OCF [a high-performance computer, storage and data analytics integrator], and Univa, our resource scheduling partner, we're supporting a big-uptake in research into AI and this is a great demonstration of how the university is investing in cutting-edge research equipment for researchers and students.”

Julian Fielden, Managing Director of OCF, added: “Modern AI, HPC and analytics workloads are driving an ever-growing set of data intensive challenges. These challenges can only be met with accelerated infrastructure, such as IBM’s POWER9. In such a highly competitive field as academic research, providing superior HPC services to compute large quantities of data quickly, can help to attract world-class researchers, as well as grants and funding.”

The delivery of the computers comes at a time when Queen Mary is set to join The Alan Turing Institute, the national institute for data science and AI, as a university partner later this year. Data science will play an increasingly important role in modern life and, as a result of this exciting new partnership, Queen Mary will significantly build upon its world leading research in the field.

Thomas King added: “Access to this technology and our existing computing facilities puts Queen Mary in a strong position to contribute as a partner of the Alan Turing Institute and support the science of Health Data Research (HDR) UK London.”

And to finish off, here's a video from the archives about the delivery of Queen Mary's first computer.