5 must-see exhibitions in London in 2021

London’s museums and galleries are world-renowned, and now they’ve reopened to visitors, you’ll be able to make the most of them. Here are five standout exhibitions now open for booking. 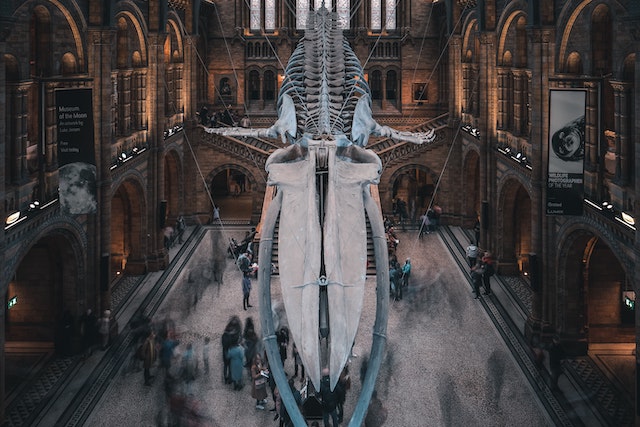 A blue whale skeleton on display at the Natural History Museum

Fantastic Beasts: The Wonder of Nature

If you’re a Harry Potter fan – or just a fan of weird and wonderful creatures – you won’t want to miss this one. A new exhibition at the Natural History Museum showcases critters from the Harry Potter universe alongside stranger-than-fiction ones from the natural world.

It’s on until January 2022 and student tickets cost £17.50, which includes admission to the museum. Located in South Kensington, the iconic building is worth a visit in its own right – even if only for the jaw-dropping whale skeleton suspended from the ceiling.

What’s more, it’s on the same road as the Science Museum and the V&A, so you can make a day of it.

The Art of Banksy

From now until 1 November, a 12,000-square-foot warehouse space in Covent Garden is host to the world’s largest private collection of Banksy artworks.

The Bristol-based street artist rose to prominence in the late 90s for his tongue-in-cheek graffiti, and despite becoming one of the world’s most popular political artists, he’s managed to keep his identity secret.

The 60 pieces on display include some of his most iconic works, like the instantly recognisable ‘Girl and Balloon’. Student tickets cost £17.50 from Monday to Friday and £19.50 at the weekend.

Once a purely practical sports shoe, the humble sneaker – or trainer – has evolved into a fashion phenomenon and an 80-billion-dollar global industry.

This exhibition at the Design Museum in Kensington tells its story, and explores the many subcultures that have sprung up around trainers worldwide.

Along the way, you’ll get a look at some cult classics, limited editions and innovative new designs from your favourite brands – including a £99,000 pair of self-lacing Nikes made for Back to the Future II. It’s on until October and tickets cost £10.90 for students.

You might recognise Yayoi Kusama’s dazzling immersive installations from your Instagram feed. Now, until June 2022, you’ll have the chance to experience them for real at the Tate Modern.

Kusama’s iconic mirror rooms transport visitors to another dimension of endless reflections. She’s produced more than 20 of them over the course of her career, and this exhibition includes one of her largest to date.

Tickets are sold out until the autumn but more will be released in September – sign up on the Tate website to be notified.

Even better, 16–25 year olds get £5 entry to any Tate exhibition via the Tate Collective scheme, so you can check out the rest of their programme in the meantime.

Since it was first published in 1865, Alice's Adventures in Wonderland has been adapted and re-imagined countless times, inspiring generations of artists, musicians and designers.

Now until 31 December, this exhibition at the V&A is exploring Alice’s cultural legacy, while its immersive installations let you take a tumble down the rabbit hole yourself: you can join the Mad Hatter’s tea party and even play a mind-bending game of croquet in virtual reality.

Student tickets cost £15, and you’re free to visit the V&A’s permanent collection afterwards. If you’re interested in design, leave yourself plenty of time to explore – it’s home to an incredible range of furnishings, clothes and jewellery from across the centuries.