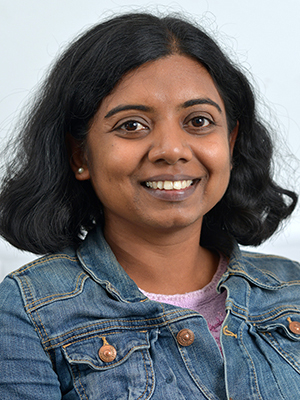 Following a PhD from Trinity College, University of Cambridge (with Prof. Pines, Gurdon Institute, Cambridge, UK, 1998-2001), and Post-doctoral research at the Massachusetts Institute of Technology and Harvard Medical School (with Prof. Sorger, Cambridge, USA; 2002-07), Viji started her own research group as a Cancer Research UK Career Development Fellow at the Department of Genetics, University of Cambridge (2008-15).

Viji’s group moved to the School of Biological and Chemical Sciences, QMUL in August 2015. Her research group uses a combination of high-resolution microscopy and molecular biology techniques to understand the molecular mechanisms that ensure chromosomal and genomic stability in normal and cancerous human cells.

Research in the group is funded by a variety of funding sources including the Royal Society, MRC and BBSRC.

Dr. Draviam’s research is aimed at understanding how cytoskeletal forces are generated and controlled within human cells. The group reported novel microtubule-mediated events that operate during human cell division: (i) the end-on conversion process, through which human chromosomes captured along lateral walls of microtubules are brought to the ends of microtubules, without detachment, and (ii) previously unrecognized cortical Dynein-independent and microtubule-dependent mechanisms that maintain the position of spindle.

Our current research focus is dedicated to understanding (i) how human chromosomes are accurately segregated and (ii) how the plane of cell division is correctly defined.  For this purpose, we combine live-cell microscopy with molecular, computational and biochemistry techniques. In addition to uncovering fundamental cell division mechanisms, our findings have been useful in the context of diseases: to explain molecular lesions that promote aneuploidy (irregular chromosome numbers) – a common feature of aggressive cancers and to develop drug re-positioning strategies for identifying new microtubule-targeting drugs.

Microtubules capture chromosomes at a specalised sub-micron sized multi-protein structure called the ‘kinetochore’ (reviewed in Tamura and Draviam, 2012). By developing a novel high-resolution imaging strategy, our group showed for the first time that human kinetochores captured along lateral-walls (lateral attachment) become tethered to microtubule-ends (end-on attachment), without detachment,' through a multi-step process (Shrestha and Draviam, 2013).  We termed this the ‘end-on conversion process’ and described distinct sets of proteins required for tethering the kinetochore to microtubule-walls versus microtubule-ends. We study how these two different modes of kinetochore-tethering are established and monitored, using a combination of biochemistry and cell biology tools.

In an ongoing collaboration with the Donald group at Cambridge University, we have (i) developed a semi-automated software Spindle3D to track the temporal evolution of spindle movements during mitosis, (ii) identified a ‘bias’ in the rotation of spindle towards its predefined position and (iii) developed a model describing the molecular and mechanical basis for this biased rotation (Corrigan et al, 2013, Corrigan et al., 2015). Interestingly, the cortical force generators are required for rotating but not the stable maintenance of spindle orientation, suggesting the presence of unrecognized cortical tethering mechanisms. We are currently exploring these tethering mechanisms, using microtubule and spindle tracking tools in combination with protein depletion and mutant protein expression studies. The findings will contribute to our understanding of mechanisms that control cell size, position and fate within tissues.

An average human being experiences tens of trillions of cell divisions.  Defects in chromosome segregation can lead to chromosomal instability and aneuploidy, hallmarks of aggressive cancers. Defects in spindle orientation can lead to incorrect plane of cell division and loss of tissue organization, commonly found in age-related disorders. So, we work with pharmacogenomics experts for employing our molecular knowledge of mitosis and microtubule regulation to develop therapeutic and diagnostic tools.

Find out more about Dr Viji Draviam's lab and research.