When Dogor was found in frozen mud in Siberia, scientists couldn't tell if he was a wolf or an early dog. 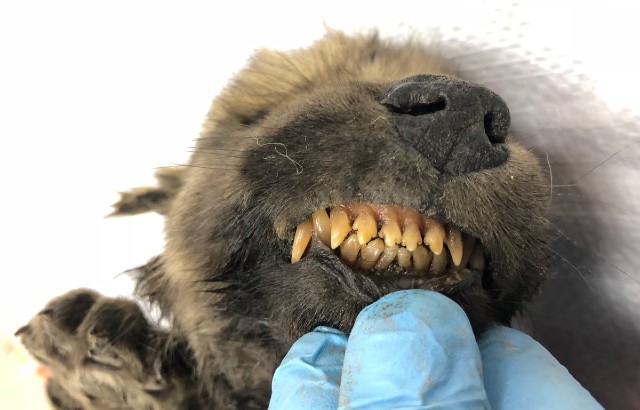 He was remarkably well preserved - and scientists were able to tell that he was male, his body was 18,000 years old and he was around 2 months old when he died. His name means 'friend' in the Yakut language. He was particularly puzzling because normally it's relatively easy for scientists to distinguish between wolves and dogs.

Queen Mary's Dr Dave Stanton and Love Dalén from the Centre for Palaeogenetics carried out the genomic sequencing that finally pinpointed Dogor's true identity. The revelation is included a paper that analyses 72 ancient wolf genomes, spanning the last 100,000 years, from Europe, Siberia and North America - and moving us closer to answering key questions about the domestication of dogs from wolves. Queen Mary's Dr Laurent Frantz was also involved from the start of the study.

"Our research has revealed that Dogor is a wolf. He would have lived near the end of the last Ice Age, so would have been an ancestor to many of the wolves that live today.

We were able to identify this because we increased our dataset, and did more sophisticated analysis that was able to isolate the parts of the genome that were 'characteristic' of wolves and dogs.

The dataset in the paper is quite remarkable - there are around 70 genome sequences over a one-hundred-thousand year time series. So we could look in a huge amount of detail about how wolves evolved over this time - and of course one aspect of that was how they relate to domestic dogs."

Dogs were already known to have been domesticated from the gray wolf during the Ice Age, at least 15,000 years ago. But where this happened and whether it happened in one or multiple locations is unclear.

The researchers found evidence that two separate populations of wolves contributed DNA to dogs. This suggests that wolves may have been domesticated more than once - or alternatively that they were domesticated once but mixed again with wild wolves.

The researchers found that both early and modern dogs are genetically closer to ancient wolves in Asia than those in Europe - suggesting a domestication somewhere in the east. Early dogs from north-eastern Europe, Siberia and the Americas appear to have a single, shared origin from this eastern source.

But early dogs from the Middle East, Africa and southern Europe appear to have some ancestry from another source related to wolves in the Middle East, in addition to the eastern source. This suggests wolves were domesticated more than once, or early dogs mixed with wolves.

The paper, published in Nature, is remarkable in its scope - archaeologists from 38 institutions and nine different ancient DNA labs in 16 different countries contributed. They used remains from previously excavated wolves, including Dogor. It is the first time scientists have directly tracked natural selection in a large animal over a period of 100,000 years.

Dr Stanton said: 'One thing that is striking in terms of the wolves is how easily and quickly they appear to have been able to move across their entire range. This could have been one of the reasons that they were able to survive the last ice age, when many of the other animals they lived alongside, like woolly mammoths and cave lions, went extinct.’