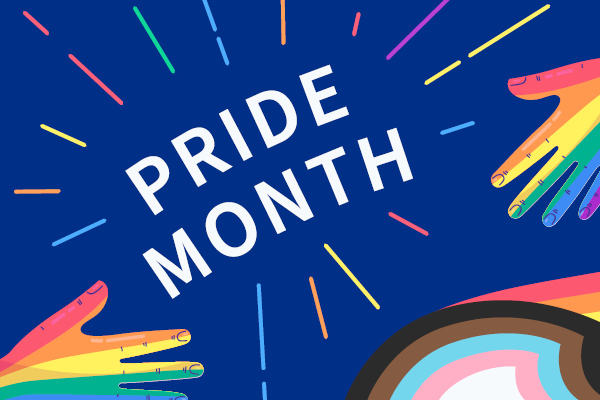 Every June the Queen Mary community comes together to mark Pride Month: it is a time for us to celebrate LGBTQA+ culture, progress and achievement as well as recognise current issues facing the LGBTQA+ community locally and worldwide.

"At Queen Mary we are delighted that each June the University comes together to celebrate Pride Month as our LGBTQA+ staff and students are a vital part of our diverse community who are the bedrock for fostering the diversity of thought that we strive for.

As well as being a time of celebration Pride Month also offers us all an opportunity to educate ourselves and raise awareness of the issues people from the LGBTQA+ community face.

I would encourage all those at Queen Mary to dedicate time through June and beyond to listen and understand the experiences and needs LGBTQA+ people and identify how we can ensure our LGBTAQ+ staff and students can flourish and reach their full potential."

What is Pride Month?

Pride Month is about people and communities coming together in celebration, protest and solidarity, and to remember those who have fought for equal rights for the LGBTQA+ communities. Pride Month takes place during the month of June, to mark the anniversary of the Stonewall riots in New York City, June 1969.

Pride Month is often marked with parades, protest marches, poetry readings, public speaking, educational/awareness raising sessions and many other events. The events are a huge celebration of diversity as well as an acknowledgment of some of the hard-won freedoms of LGBTQA+ communities around the world.

Making sure that celebrating Pride Month in an intersectional way is vital as it recognises that overlapping identities impact the experiences and lives of LGBTQA+ people throughout history and today. At Queen Mary 5-7% of staff identify as lesbian, gay or bisexual and we have staff and students from over 170 countries, 75% of our undergraduates identify as being from Black, Asian and Minority Ethnic ethnicities and 9% are registered as having a disability: further highlight why intersectional approaches to Pride Month are imperative for us as a community.

Why is Pride Month important to Queen Mary?

As well as being a month-long celebration of LGBTQA+ culture, achievements and progress, Pride Month was born from protest and continues to be an opportunity to raise political awareness of current issues facing LGBTQA+ communities nationally and worldwide. Pride Month also acts as a reminder of how much more still needs to change and be done to ensure that all people who identify as LGBTQA+ are supported and included.

Pride Month is a time for the LGBTQA+ community and allies to continue to raise awareness of the inequalities and discrimination faced by LGBTQA+ communities around the world and to campaign for equal rights and freedoms for all.

What actions can you take all year round to celebrate and support the LGBTQA+ community at Queen Mary?